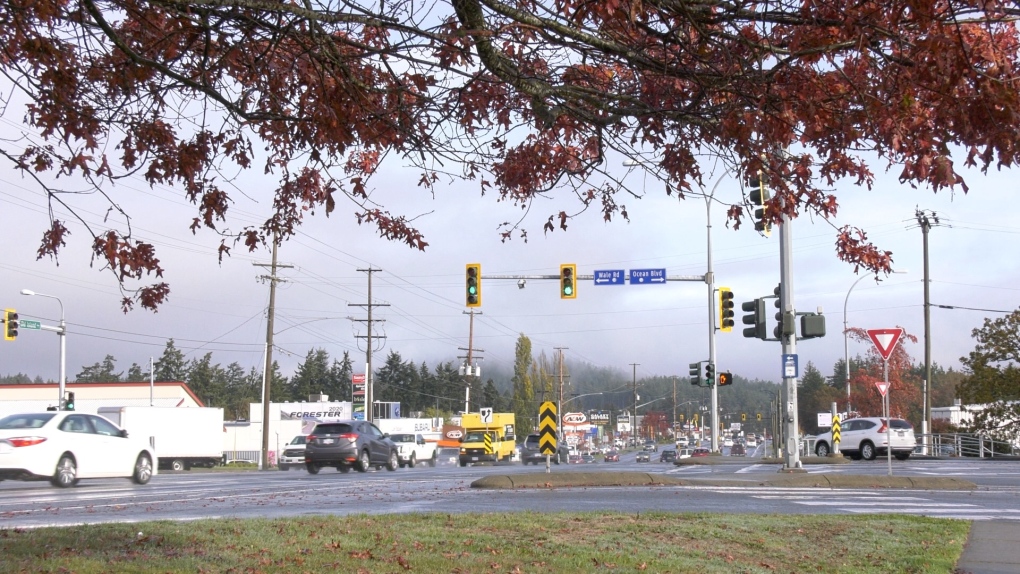 The City of Colwood is hoping to build an overpass that connects to the Galloping Goose Trail at this intersection, as the Island Highway cuts through the popular regional trail: (CTV News)

VICTORIA -- The City of Colwood is hoping to build a bridge that would create safe passage for Galloping Goose Trail users trying to cross Island Highway near Wale Road.

Right now, the Galloping Goose is divided by several lanes of traffic near Wale Road in Colwood, forcing cyclists and pedestrians to get off the trail and use a portion of Wale Road before crossing the busy intersection at Sooke Road and then lastly looping back to get onto the Goose.

Colwood councillors say a predestination overpass would connect the trail and put an end to some dangerous traffic behaviour.

“You do see people making some pretty scary maneuvers trying to cross five lanes of traffic, so it would be a treat to prevent that and have an overpass here,” said Colwood councillor Stewart Parkinson.

“It’s one of the few places on the trail that doesn’t cross at an intersection with a set of lights, so it’s an ideal place to put a bridge for safety,” he said.

A study completed in 2012 estimated that the cost of the overpass would be nearly $5 million. At the time, the funding just wasn’t available.

“There’s been discussions about this for quite some time. It’s obviously been something that’s been on the desire line, but you know, it’s not cheap,” said Parkinson.

Now, the City of Colwood is pursuing a grant through the federal and provincial government’s Investing in Canada Infrastructure Program that would cover most of the project. If approved, the costs Colwood would have to cover would be about $1.4 million, which would come from reserve funds the municipality has set aside for amenities.

Parkinson says that design work on the overpass could start as early as March 2021 but that the municipality needs the external funding for the project to ever get off the ground.

“The project, frankly, won’t go ahead without the grant,” he said.

So far this year, more than 12,000 trail users have passed an automated counter along the Galloping Goose Trail near Wale Road.