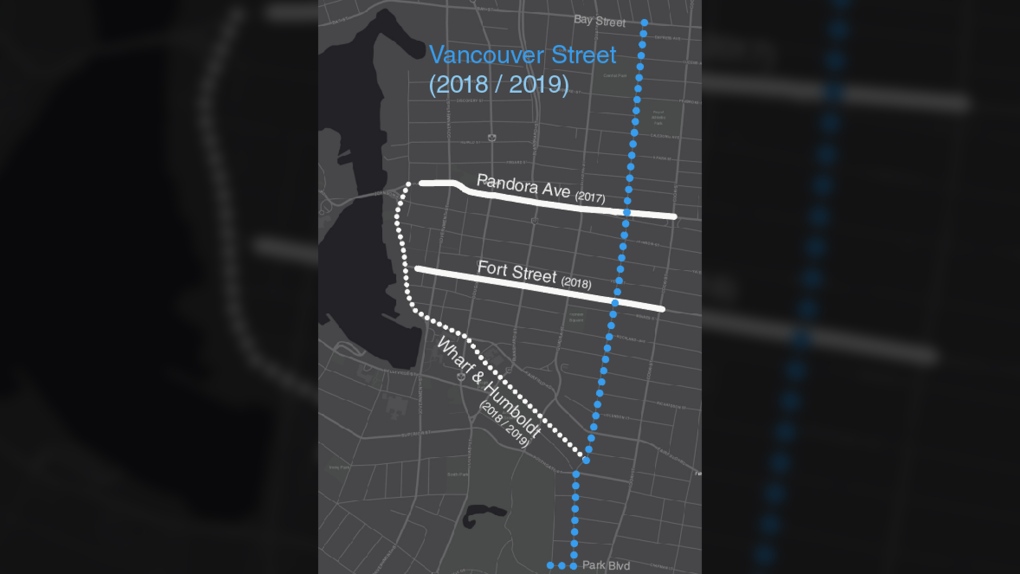 The Vancouver Street bike lane will run from Bay Street to Dallas Road, with part of it running through Beacon Hill Park. (Victoria.ca)

After the rollout out two major bike lanes on downtown streets, the City of Victoria is turning its attention to the next cycling path that will connect the routes.

The path will run along Vancouver Street from Bay Street to Dallas Road, with part of it running through Beacon Hill Park. It will also connect the Fort and Pandora bike lanes and the Humboldt bike lane, which is still in the design phase.

City staff are seeking feedback from the public and business owners for the Vancouver Street bike lane, with a series of open houses being held this week.

"The city is interested in hearing from as many people as possible, particularly those who live, work, learn and travel on Vancouver Street," it said in a news release.

It will hold engagement sessions this week at the following locations:

Those wanting to give their thoughts on different designs and considerations for the bike lane can also do so through an online survey.

The preliminary design for the Vancouver Street lane features a mix of protected bike lanes on busy downtown streets and shared-use neighbourhood bikeways on traffic-calmed streets.

Once it gathers feedback, the city will go to work making design revisions and approvals through winter, and construction will begin in fall 2019.

The lane is part of Phase 1 of the city's plan to build an All Ages and Abilities (AAA) bike network throughout Victoria and eventually extending to other municipalities.