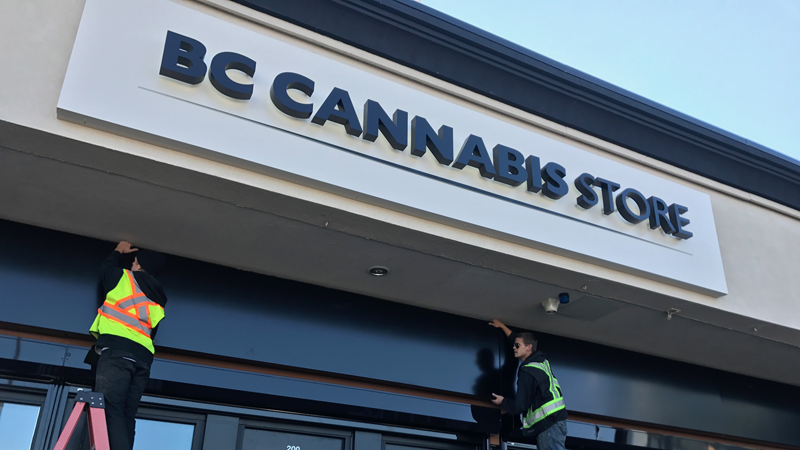 The BC Cannabis Store in Kamloops was the only provincially licensed store to open on legalization day, Oct. 17, 2018. (CTV News)

VANCOUVER -- The price of cannabis at government-run stores in British Columbia declined while potency rose between 2019 and 2020, says a new report that has a researcher raising questions about what its findings mean for public health.

The study found that the amount of THC, the psychoactive ingredient in cannabis, increased from 64 milligrams to 129 mg per person over the age of 15 during that period.

Dr. Tim Naimi, director of the Canadian Institute for Substance Use Research at the University of Victoria, said gross revenue of about $290 million from sales of cheaper but stronger cannabis suggests there's a need to consider tougher public health measures, perhaps through taxation and potency restrictions.

“We hope over time that the government will consider public health considerations and not engage in a race to the bottom in terms of selling the most potent stuff for the cheapest prices,” said Naimi, who led the researchers doing the study.

The federal government did not place a limit on the amount of THC used in many cannabis products when its use was legalized in 2018.

The Ministry of the Solicitor General could not immediately be reached for comment.

Sales of regulated cannabis doubled in B.C. as the number of government stores rose from 11 to 25, researchers found from data provided by the province, which commissioned the report.

At the same time, the number of private stores selling cannabis also jumped from 128 to 270. But on a per-capita basis, government stores sell about twice as much cannabis as private ones, the findings show.

Last year, the B.C. government sold cannabis products containing nearly 8,000 kilograms of THC, amounting to about 400 million joints, the report says. Flower and pre-roll products accounted for about 84 per cent of all cannabis sales by THC weight.

Naimi said more research is needed into legal cannabis sales, including why the Northern Health region had the highest per-capita sales in the province.

“That is interesting because that is similar to what we see for alcohol,” said Naimi, an alcohol epidemiologist.

It's hard to compare sales of regulated cannabis across Canada because data are not collected in the same way in all jurisdictions, he said.

David Hammond, a professor in the school of public health sciences at the University of Waterloo in Ontario, said the rise in THC levels outlined in the report can partly be explained by the fact that more concentrated products like vape oil and edibles were not legally available until the start of 2020.

More frequent users of higher-potency products are also transitioning to the legal market, said Hammond, who leads an ongoing international cannabis policy study that includes analysis of both the legal and illegal markets.

While the goal of governments was to switch users to the legal market, questions are now being raised about their responsibility to better regulate what's being sold, he said, adding that Quebec is the only province to set a potency cap on THC.

“That is a question that regulators and advocates and public health authorities are starting to ask, once we start to see the establishment of the legal market,” he said of THC limits, particularly because younger users attracted to vaping products are at risk of nicotine addiction.

“Right now you can buy strawberry, peaches and cream vape oil with a THC level that will blow the most potent dried flower out of the water. And those are the products that are most popular among young people,” Hammond said.

“We really don't know much about solid concentration vape oils because they're relatively new on the market so that is an important public health concern.”

Overall, it's important for provinces to have detailed and consistent data on the legal cannabis market and make it available to the public, he said.

“That's where we'll learn whether there are advantages to having government-run or private stores.”

This report by The Canadian Press was first published June 23, 2021.