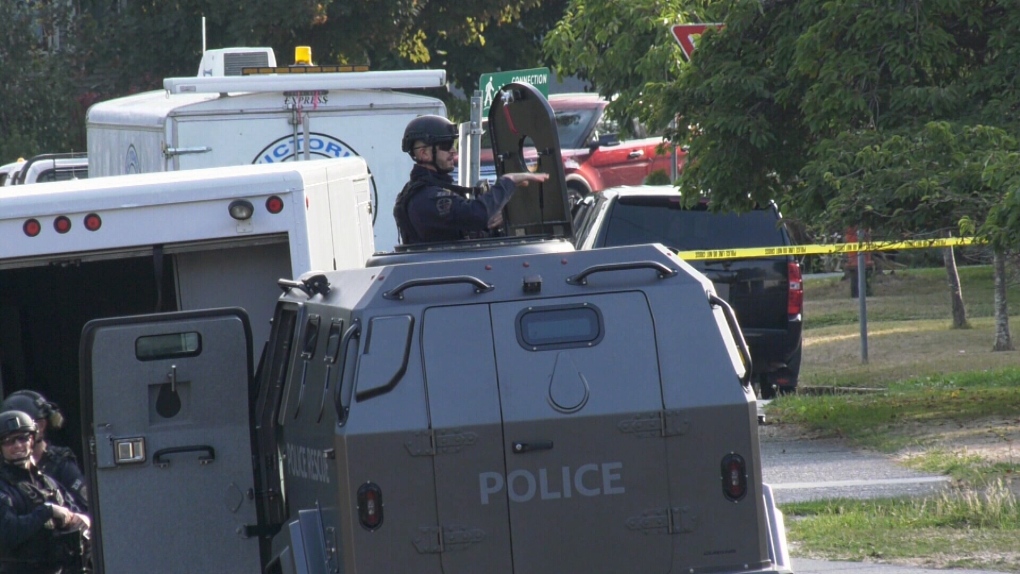 A lengthy standoff in Victoria’s Shelbourne corridor has resulted in a litany of charges for an 28-year-old man.

According to court documents Matthew Neely has been charged with dangerous operation of a conveyance , possession of stolen property over $5,000 and breach of an undertaking.

A dramatic standoff between heavily armed police and a man barricaded inside a home near the Royal Jubilee Hospital came to a close Wednesday, more than seven hours after the ordeal began.

Windows could be heard breaking as officers with the region's emergency response team (ERT) donned gas masks and descended on the home at approximately 2:30 p.m. Wednesday.

Police emerged with the suspect and arrested him at gunpoint shortly thereafter.

Several homes in the 2200-block of Shelbourne Street were evacuated while Victoria police, the ERT and an armoured vehicle surrounded the home.

Flashbang grenades were seen and heard being fired towards the home shortly after 10:30 a.m.

Officers were called to the area before 6:15 a.m. after reports that an intoxicated man was standing in the middle of the road near Shelbourne and Begbie streets.

When officers arrived, police say the man fled in a vehicle, ramming several parked cars, including a police vehicle. Nobody was injured in the escape attempt.

Police say the stolen vehicle was abandoned a short distance away and the man fled on foot.

Police believe the man then fled to the home on Begbie Street where he remained barricaded inside for the morning and much of the afternoon.

A damaged vehicle with at least one flat tire was seen parked in front of the house on Shelbourne Street.

One man was escorted out of the home by heavily armed police in the morning, though the suspect remained inside.

A police negotiator could be heard using a megaphone to tell the barricaded suspect to surrender, that they were under arrest and that no harm would come to them.

“We are here to help," police could be heard saying over the loudpseaker. "Come out with your hands up.”

Traffic was re-routed from the area and BC Transit bus routes #27 Gordon Head/Downtown and #28 Majestic/Downtown were detoured for much of the day.

Neighbours first noticed police in the area around 7 a.m. and say the residence in question has been the focus of frequent police visits lately.

By 12:45 p.m., police once again took to the megaphone to ask the man to leave the residence and co-operate with officers.

"We don't want to escalate this anymore," police said. "It's time. Come out of the house. Follow the instructions of the officers."

Police said at 3 p.m. that officers had been wiaiting to obtain a warrant to enter the home prior to the raid.

Neighbours identified the arrested man as Matthew Neely. According to one neighbour, Neely had recently told them that he wanted to attend rehab in an effort to turn his life around.

Neely is innocent until proven guilty in a court of law.