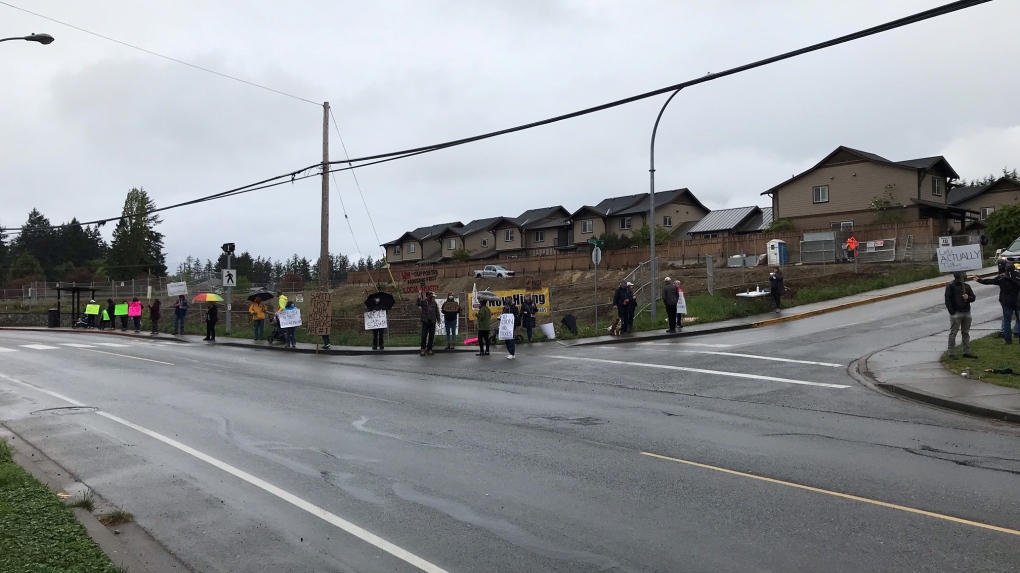 Protesters say a lack of transparency from BC Housing is one of their main concerns: (CTV News)

VICTORIA -- On Monday morning, a protest was held at the development site of a fast-tracked supportive housing development in Central Saanich.

Beginning at 8 a.m., more than 30 people stood outside the construction site, located at 1909 Prosser Rd. Most protesters were holding signs and waving to honking cars.

Residents in the area are concerned that the new building, located at the corner of Prosser and East Saanich roads, will be used to shelter several of Victoria’s downtown homeless who are suffering from mental health and addiction issues.

According to BC Housing, approximately 39 permanent homes are being built with support services for people who are marginalized and experiencing homelessness at the development.

"With this design, priority will be given to people at risk of homelessness in the Central Saanich region who need minimal supports and are ready to move to living independently; many of these people have been living successfully in temporary shelters," reads the BC Housing website.

But many of the protesters say they're upset over a lack of transparency by BC Housing.

"We’re pretty concerned about being left in the dark for so long without answers about this development," said Steven Manchura, one of the protest organizers.

People living within 100 metres of the project received letters form BC Housing when the project first started, says Manchura. He says that much of the information was contradictory and concerning to those who received it.

"What BC Housing has planned for Prosser has been done without community input or consent," he said. "And it does not factor in the safety of the hundreds of families with children in the area who frequent Centennial and Blossom Park."

Protesters say that Central Saanich police, the Saanich Peninsula hospital, and municipal crews are ill-equipped to deal with many of the problems that can arise from this kind of supportive housing.

Neighbours are also concerned about safety issues around their parks and homes, pointing out that many seniors, children and families live right next door to the development and surrounding area.

A concerned neighbour who identified himself as Lorne says 39 supportive housing units without adequate support would be "a recipe for disaster."

He’s not opposed to a facility that has treatment and support for the most vulnerable, but wants to see something that will have different levels of care that will transition people back into society and not impact the community in a negative way.

Many of the locals have learned of the project through the media, they say, and not from BC Housing, leaving them feeling blindsided.

Linda only wants people living at the Prosser Road facility if they first receive addictions and mental illness supports.

Manchura agrees, saying "if we bring more people into this community, we need to have those supports in place."

There have been two Community Dialogue Sessions put on by BC Housing so far for residents with questions and concerns. Two more sessions are scheduled for May 4, but participants are required to register and one session is already full.

Neighbours feel the sessions, so far, have not provided clear and adequate information and BC Housing is ignoring their concerns.

Central Saanich community members have created a website called Let's Actually Talk, which is designed to outline many of their issues with the project.

Protesters say they will continue to fight to be heard and hope for a solution that everyone can live with.