A pair of tall trees toppled onto a Nanaimo, B.C., home Wednesday as a windstorm wreaked havoc on Vancouver Island.

Video obtained by CTV News shows the moment the trees uprooted in a gust of wind and collapsed onto the home on the shore of Nanaimo's Cathers Lake.

Severe wind warnings were in effect across Vancouver Island as more than 53,000 customers were without electricity by early Wednesday afternoon.

Mounties on scene told CTV News no one was injured by the fallen trees.

"It was really scary," said witness Izabel Kazenbroot-Guppy, whose car was also hit by a falling tree. "Just a huge crack and a boom and the crunch of the roof." 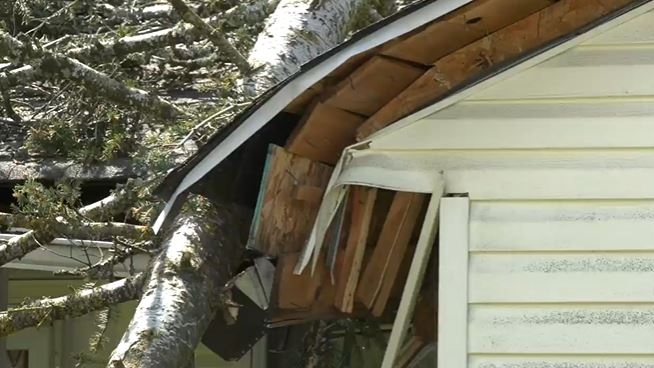 One resident reported his shed was crushed by the two trees, though his neighbour's home took the brunt of the impact.

"When I saw my neighbour's house I thought, 'Oh, boy,'" said resident Jaime Silverio, surveying the wreckage of his shed.

Cathers Lake resident Rod Corraini was sweeping up glass on the roadway in the neighbourhood after his neighbour's skylight was torn off by the gust.

High winds also forced the cancellation of ferry sailings and the planned arrival of at least one cruise ship to Victoria's Ogden Point amid safety concerns.

Prime Minister Justin Trudeau announced more money for Ukraine -- including a $200-million loan through the International Monetary Fund -- at the end of the Group of Seven leaders' summit in Germany.

Leaders of the world's wealthiest democracies struck a united stance to support Ukraine for 'as long as it takes' as Russia's invasion grinds on, and said they would explore far-reaching steps to cap Kremlin income from oil sales that are financing the war.

A 101-year-old man was convicted in Germany of 3,518 counts of accessory to murder on Tuesday for serving at the Nazis' Sachsenhausen concentration camp during the Second World War.

Mary Mara, an actress known for roles on 'ER' and 'Ray Donovan,' has died, her manager, Craig Dorfman, said in a statement to CNN. She was 61.

Most people in Canada do not think people should have to swear an Oath of Allegiance to the Queen, according to a poll ahead of Canada Day.

'There won't be occupiers': City of Ottawa, police prepared for Canada Day protests

City of Ottawa staff and the Ottawa Police Service are ensuring residents that planned protests on Canada Day will not devolve into the kind of occupation that residents endured this past winter.