VICTORIA -- A pedestrian was sent running during a building demolition in Esquimalt on Friday.

The two-storey building has stood at the corner of Esquimalt Road and Head Street for decades, housing a street-level grocery at 899 Esquimalt Rd.

The building, along with a nearby house, had recently been wrapped in orange plastic while work to remove the asbestos-laden stucco exterior was completed.

On Friday morning, a pedestrian was walking in front of the building at the moment it collapsed onto the sidewalk, almost striking him.

The scene was captured on a video submitted to CTV News.

The demolition was underway to allow for the construction of a multi-storey, commercial-residential building called Pacific House.

The video of the demolition was shared with site developer Lexi Group, whose managing director said pedestrians were instructed not to enter the area at the time of the collapse.

Babak Nikbakhtan said the sidewalk was properly closed to traffic and pedestrians were not supposed to be in the area. 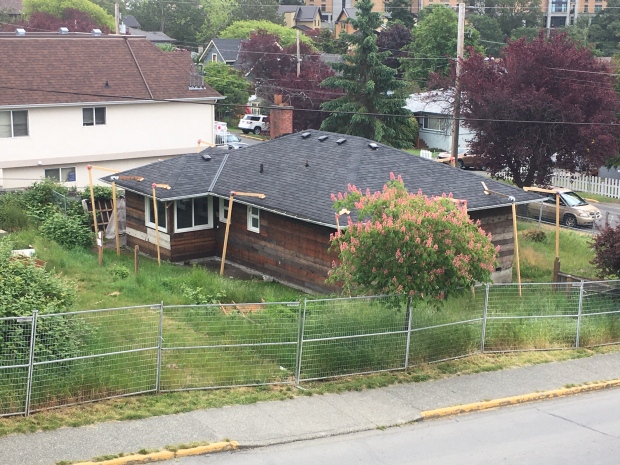 Many residents raised concerns about the redevelopment of the corner during an Esquimalt council meeting July. Complaints ranged from obstructed views to over-densification of the area.

At 12 storeys, Pacific House will be one of the tallest buildings in Esquimalt once it's completed.

The developer, Lexi Group, had already been given approval on the project before the town’s Official Community Plan was changed in 2018, capping new developments at six storeys.