Caught on cam: 2 men in hospital after downtown Victoria stabbings

VICTORIA -- Victoria police are investigating a pair of stabbings Sunday night that left two men in hospital, one with life-threatening injuries.

A dashcam video provided to CTV News shows a man crawling in the roadway of Douglas Street near Pembroke Street around 9:20 p.m., his shirt apparently soaked in blood.

"The sidewalk had a large pool of blood, a package of suspected drugs, and one of those knife clasps for your belt," the witness said.

A second witness who administered first-aid to the man says she initially thought the victim had been hit by a car.

"I saw a gentleman lying prostrate across two lanes of traffic and wondered if it was a pedestrian hit by a car," Tannis Wahl tells CTV News. "But then with the amount of bleeding, I knew it was something more grievous."

Wahl, who has a medical background, pulled her vehicle over and put on some gloves she keeps in her car during the COVID-19 pandemic.

"I saw the gentleman had been stabbed in the lumbar spine, thoracic spine, upper chest and abdomen," said Wahl, adding that the man was wearing what appeared to be a hospital wristband.

"He said he kind of, sort of, knew the individual who stabbed him," Wahl said. "It looked from the injuries on his spine that he was fleeing, and he did say that he was trying to run away."

Victoria police say the stabbing was related to an earlier altercation in Centennial Square. 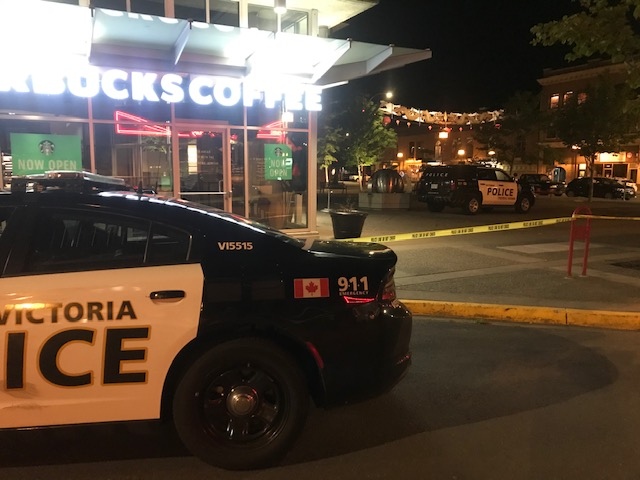 Officers were called to the square at 9:15 p.m. and found another man suffering non-life-threatening injuries after an assault with a weapon.

Both men remain in hospital Monday.