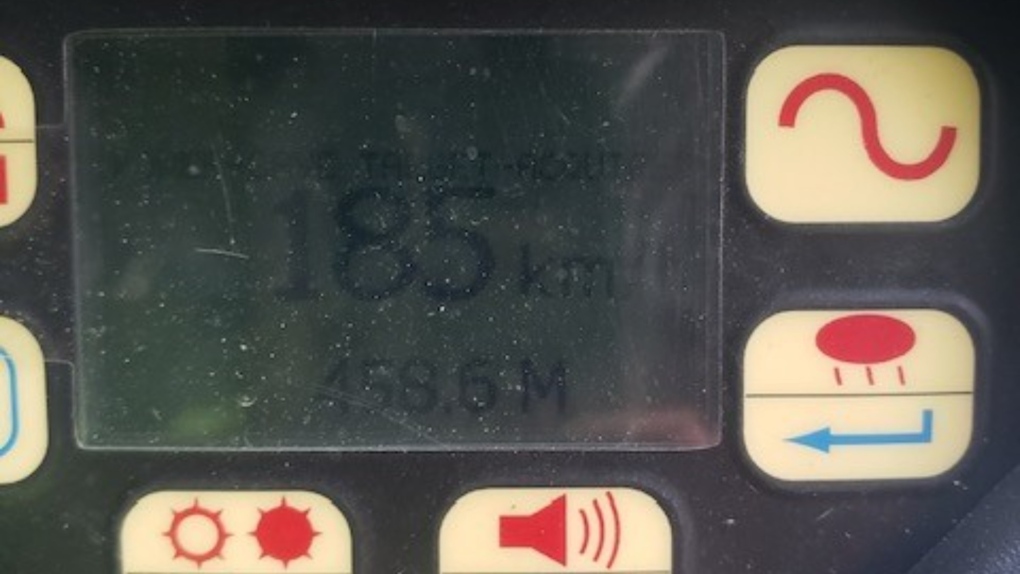 The police speed measuring device used at the time is shown. (RCMP)

Two drivers were slapped with temporary driving bans and had their vehicles impounded for seven days after they were spotted speeding excessively on the Malahat highway, according to RCMP.

One driver was spotted travelling 185 km/h in an 80 km/h zone, while the other driver was seen travelling at 153 km/h in the same area, according to Staff Sgt. Adam Tallboy, acting officer in charge of the B.C. Highway Patrol on Vancouver Island.

Tallboy says the two cars were spotted in the Tunnel Hill area of the highway heading south into Langford, B.C.

"Speaking to officers who've worked this section of the Malahat before, they say this is the fastest they've seen a vehicle coming down that section of the highway before," he said.

Both RCMP and ICBC are encouraging motorists to be mindful of bad driving habits this spring, with May being "high risk driving" awareness month.

"Speeding is one of them, but distracted driving, using electronics – we want people to make it safely through this long weekend," said Tallboy.

According to ICBC, roughly 1,800 crashes occur across B.C. during the Victoria Day long weekend, resulting in about 480 injuries and three deaths.

On Vancouver Island alone, about 270 crashes occur during this long weekend, resulting in roughly 62 injuries.

Tallboy says he expects more drivers will be coming to Vancouver Island from the Lower Mainland for the long weekend, with extra BC Ferries sailings scheduled this week.

"We'd rather not have to deal with fatalities on the highway," he said. "We want people to be safe and enjoy this long weekend."