While a second planned motorcade was cancelled Friday, there are still a number of ways the public can honour killed Mountie Const. Sarah Beckett in the coming days.

Nearly 900 people have already said they’ll attend a candlelight vigil for Beckett on Sunday night that is being organized on Facebook.

The vigil begins at 8:30 p.m. at the scene of the crash that claimed her life, at the corner of Peatt Road and Goldstream Avenue in Langford.

It will carry on down Goldstream Avenue to Veteran’s Memorial Park.

Plans are also underway for an RCMP regimental funeral to be held next week.

The public is welcome to attend the service, which will begin Tuesday at 2 p.m. at the Q Centre in Colwood.

Thousands of people are expected to attend including RCMP members from across Canada.

The City of Colwood said it will close the Island Highway to all vehicle traffic between Wilfert and Wale roads between 11:30 a.m. and 2 p.m. as approximately 4,000 RCMP, police and military officers march to the funeral. 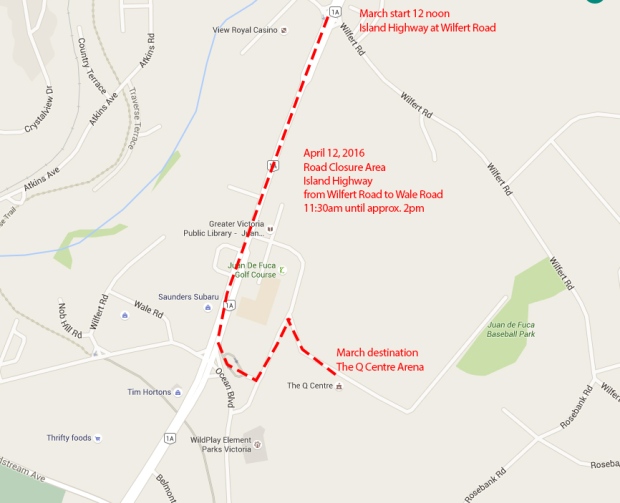 A separate campaign organized by Spouses of the RCMP is asking people to wear red in support of Beckett, her family and all members of the RCMP.

In another example of the outpouring of support for Beckett and her colleagues, BC Ferries is offering free ferry rides for all first responders on Tuesday to help them travel to the funeral.

An extra sailing will also be added Tuesday to handle the expected surge in traffic from the Lower Mainland.

Hundreds of members of the public and first responders from across Greater Victoria paid their respects to Beckett in a motorcade procession Thursday.

The campaign shattered its goal of $5,000 and raised more than $75,000 in a matter of days. The campaign will continue until Monday, April 18.