The Canadian navy will get a rare shoutout in China next month as Canada's Olympic sliding athletes are set to compete on sleds paying homage to historic warships at the Beijing Games.

Bobsled Canada Skeleton says the blue-and-white design is meant to honour the sacrifices of Canadian sailors during the Second World War and celebrate those who continue to serve the country at sea.

Canadian frigate HMCS Regina and coastal defence vessel HMCS Moncton donned the commemorative dazzle paint scheme in 2020 to mark the 75th anniversary of the end of the Battle of the Atlantic.

The battle was the longest fight of the Second World War, in which dozens of Canadian ships were sunk by German vessels in the struggle for control over the North Atlantic from 1939 to 1945. 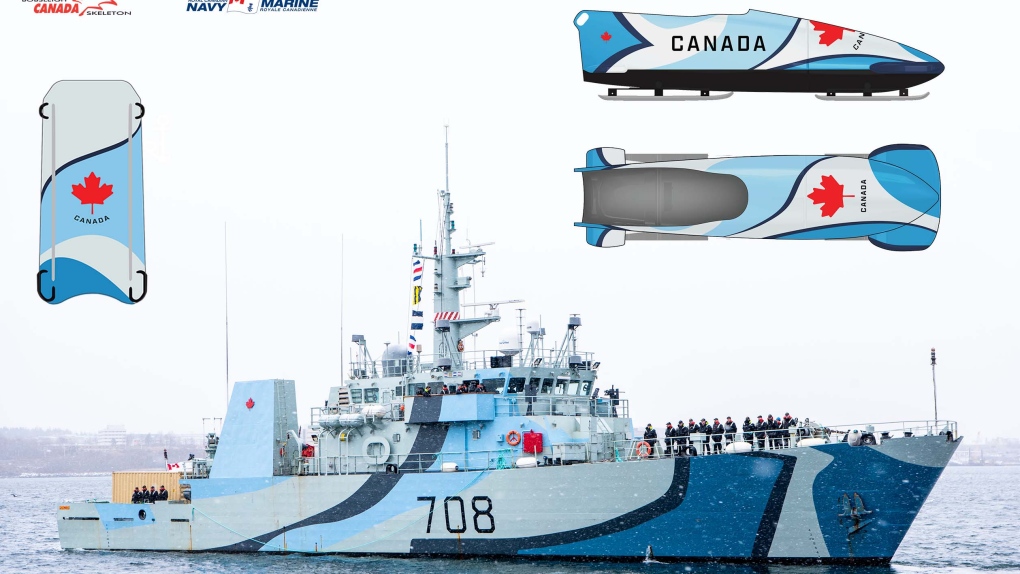 "Whether on the ice or at sea, the distinction of putting on a Canadian uniform drives commitment to the training, preparation, perseverance and teamwork required to perform under immense pressure while representing your country," Storey said.

"Sailors and athletes apply their tremendous skill – while working with specialized and purposefully designed equipment – to execute their missions with precision," she added. "We are united by the goal of making our team unstoppable, and our country proud."

Canada is sending three skeleton athletes and 18 bobsledders to the 2022 Winter Olympics.

The new sleds will be on display as Canadian skeleton athletes take to the track at the Yanqing Sliding Centre from Feb. 10 to Feb. 12, followed by bobsled from Feb. 13 to Feb 20.