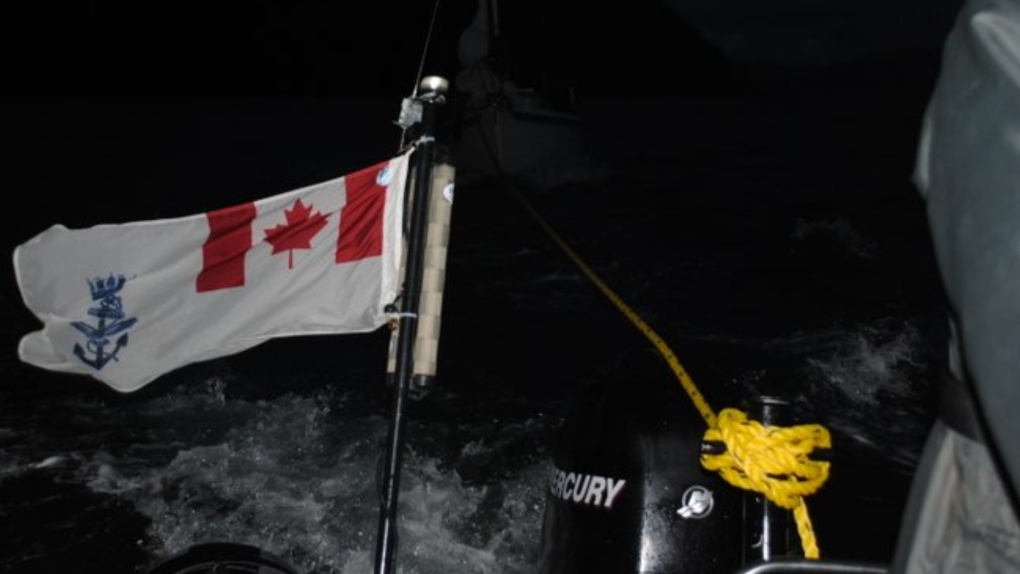 The HMCS Whitehorse was already on a planned search-and-rescue deployment in North Island waters. (MARPAC)

VICTORIA -- While much of southern Vancouver Island was treated to a show of lightning Sunday evening, up north a small sailing vessel was feeling the fury the coastal storm was whipping up.

According to Royal Canadian Navy officials at CFB Esquimalt, a distress call was issued from the northwestern waters off Vancouver Island at around 11 p.m. Sunday.

The mayday call came from an 11-metre sailing vessel with two crew and two dogs aboard.

According to the navy, the distress call was first picked up by a nearby fishing boat.

In heavy seas, the crew of the fishing vessel attempted multiple times to tie on to the sailing vessel, every cleat on the sailboat was ripped off in the pounding seas.

The crew of the nearby HMCS Whitehorse jumped it action.

The coastal defence vessel was already on a planned search-and-rescue deployment in North Island waters.

For over an hour, the crew of the Kingston-class ship attempted to tie lines to the mast of the sailboat.

Eventually they were successful and for the next four hours towed the sailboat through raging waters to the safety of Winter Harbour.

The two sailors suffered mild sea sickness, but otherwise all aboard were unharmed.

Navy members welcome a coast guard liaison aboard during the missions.