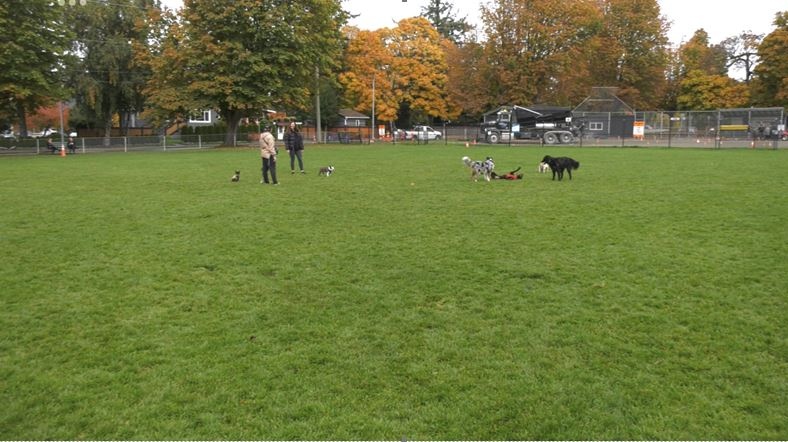 Residents living on the 1800-block of Gonzales Avenue have been without mail service for more than a month after Canada Post suspended delivery due to safety concerns about off-leash dogs.

When residents were notified by Canada Post of the service cut in early September, they were forced to travel almost six kilometres to the Canada Post sorting facility on Glanford Avenue in Saanich to get their mail.

The national postal service has since moved the pickup location to a Canada Post outlet on Fort Street which is more than 20 blocks away from their Fairfield neighbourhood.

“It is somewhat inconvenient, but in all honesty, we support the Canada Post on this issue because we see the unfenced dog area as unsafe for dog owners, children using the public pathway, and of course the postal people,” said Gonzales Avenue resident Margaret Kavanagh.

“We’ve never been told if a postie was actually bitten, but we assume something like that must have happened to have them feel unsafe,” she added.

Canada Post confirmed there is a health and safety concern regarding off-leash dogs at Pemberton Park.

“Our joint local and health safety team did visit the park and witnessed occasions when dogs were off-leash, which is a serious cause of concern for our delivery agents who deliver mail in the area," said Canada Post in an emailed statement.

“Many of our employees are dog lovers and dog owners, but they can still experience threatening dogs, bites and other injuries that can be quite serious," Canada Post said. "The reality is that it's impossible to know how any dog will react – protective, playful or otherwise – when our employees are delivering the mail."

'THE PARK HAS OPERATED THIS WAY FOR YEARS'

Kavanagh, who is a dog owner and lives across from Pemberton Park, says the issue of dogs running loose from the off-leash area can be remedied by fencing the park on the Gonzales Avenue side.

“I see the issue as the unfenced last 40 feet of Pemberton Park,” said Kavanagh. “We probably get one or two dogs in our front yard every few days, the owners are always apologetic, but the dogs can be distracted by a squirrel or something and they’re off.”

Kavanagh says she has spoken with dogs owners who would also like to see the off-leash park enclosed. She says they are concerned for their dogs' safety now that there is more traffic on Gonzales Avenue as a result of bike lanes being added to Richardson Street, which is adjacent to the park.

“What’s happened with westbound traffic at Richardson not being able to cross over at Foul Bay Road, we’re getting more car traffic on our street and that’s a worry for dog owners,” said Kavanagh. “Really all you need is 40 feet of chain-link fence.”

Kavanagh says she has written to the City of Victoria about fencing the Gonzales Avenue border of Pemberton Park. She says the only response she received was a form letter acknowledging her inquiry.

“I’m hopeful with Canada Post taking this stand maybe finally the fence will be finished,” she said.

CTV News reached out to the City of Victoria for comment on Canada Post’s safety concerns.

“This is the first we are hearing about concerns at this dog park," a city spokesperson said. "The park has operated this way for years.

“We understand that they are concerned about a perceived risk to the carrier of an off-leash dog leaving the park area or being in the area,” the city said in a statement. “To our knowledge, there has not been an aggressive incident of any kind.”

City staff say they are working with Canada Post towards a resolution to the safety concern in an effort to restore mail delivery to the affected residents on Gonzales Avenue.

“We have also worked closely with city representatives and animal control on this issue,” said Canada Post.

“We try not to fence up city parks, it’s not our first choice and can bring with it other barriers, particularly for people with disabilities,” the city said. “This dog off-leash area is also a general sports playing area and our goal is to make it as inviting as possible.”

City staff say that the 1800-block of Gonzales Avenue has not been identified as an area that requires fencing for the safety of dogs and people using the park.

For Kavanagh, if not getting her mail means the off-leash park can be made safe for all users, it's a price she is willing to pay.

“This is the reality of the way it is and I just have to make the best of the situation,” said Kavanagh. “I just want to move forward and help the postal people solve this problem.”