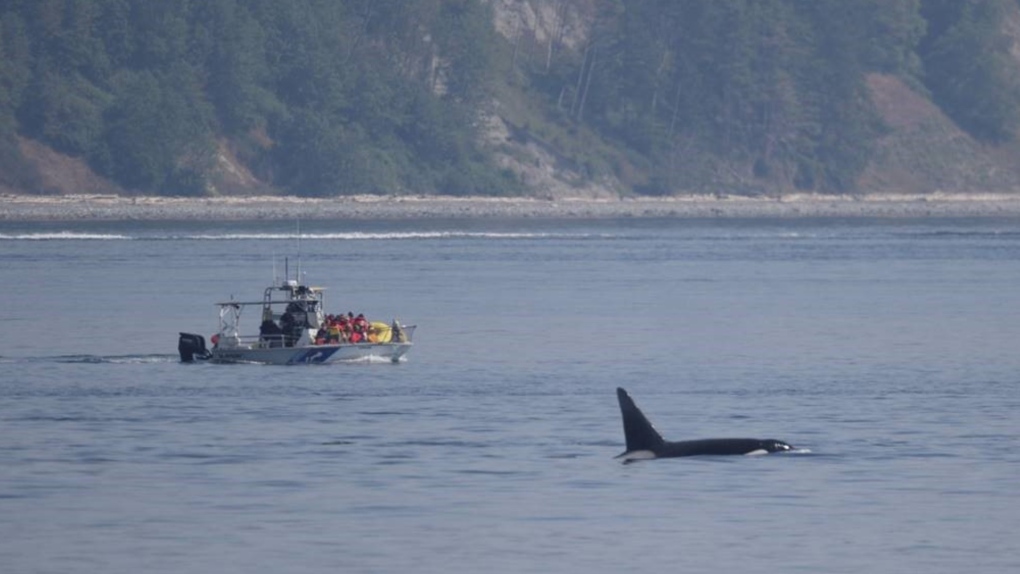 An image sent to the DFO of the incident is shown: (Fisheries and Oceans Canada)
Victoria -

A whale-watching guide on Vancouver Island has been fined thousands of dollars for getting too close to a pod of orcas.

The DFO says that Nickalaus Templeman, a guide working for Campbell River Whale and Bear Excursions, was witnessed by two other whale-watching guides illegally approaching a killer whale pod in the area.

Under the federal Fisheries Act, whale-watching vessels are prohibited from being within 200 metres of an orca in B.C. waters. The DFO says that Templeman was seen moving to within 35 metres to the orcas and encircling them.

"Mr. Templeman acknowledged over the VHF radio that he was aware of the presence of the whale pod," said the DFO in a release Thursday.

"However, he continued to travel in their direction and positioned his vessel in a way to ensure that the whales would have to pass him in close proximity."

The incident was reported by other whale watching guides and a conservation officer who was called to the scene to assess the situation, according to the DFO.

"There were six to seven commercial whale watching vessels in the area of the incident who subsequently provided witness statements, as did several of the tourists who were on board," said the DFO.

In September, Tempeleman was found guilty of the violations in provincial court and was fined $10,000 for the incident. He was served a $5,000 fine under the Species At Risk act, and another $5,000 through the federal Fisheries Act.

The money collected from the fines will go towards "conservation and protection of marine mammals in the waters off British Columbia," according to the DFO.