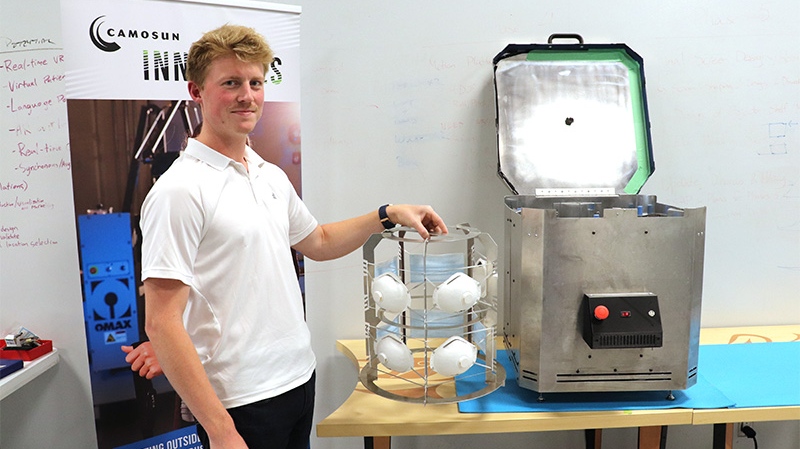 VICTORIA -- Researchers at Camosun College in Victoria have developed a new sterilization chamber that is designed to clean personal protective equipment (PPE), like N95 respirator masks, so they can be reused by health-care workers.

The device, called a “UV oven”, or “UVen”, uses ultraviolet light to sterilize masks, which can be cleaned and reused at least four more times.

The current UV oven is a prototype that can clean 10 masks within 30 minutes. The entire device weighs less than 20 kilograms and operates on standard voltage.

Overall, Camosun says that the UV oven costs and weighs roughly the same amount as a standard-sized mini-fridge.

The relative portability and low cost of the device has Camosun hoping that the UV oven can be used conveniently in different settings, like in hospitals, walk-in clinics, a doctor’s officer, or any similar location.

"Our shop wanted something that could really improve the odds when it comes to responding to the pandemic, not just for B.C. but for people around the world. Something that can be built and installed quickly and easily," he said. "An innovation that will save lives."

The UV oven is made out of aluminum and other parts that are “commonly available”, like regular UV lightbulbs.

The developers of the device say that extensive testing has been done to ensure that the masks are 100 per cent sterilized using UV light.

"UV-C light is a germicide and we know that it will kill viruses and bacteria," said Richard Burman, education lead on the project.

"Inside of the device is a reflective surface, and that UV light is going to be bouncing around in there. We've worked to ensure that all parts of the mask being sterilized inside receive a consistent and strong enough dose to kill the virus," he said.

Island Health is working with Camosun College and plans to use the device in its hospitals once it is ready.

The UV oven is currently in its testing phase. Once that is complete, Island Health says it will begin using five of the devices as soon as possible.