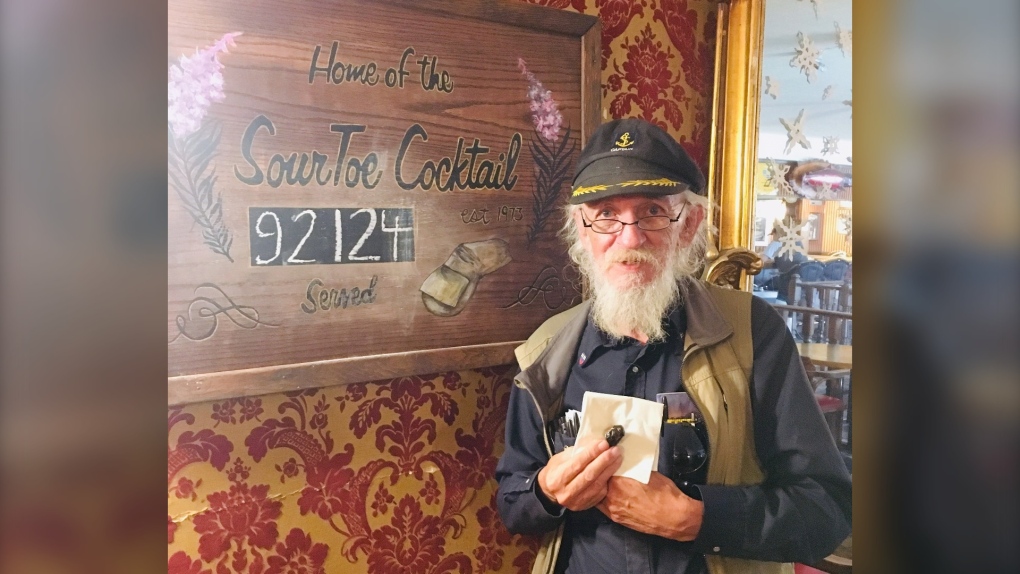 Downtown Hotel sourtoe 'toe master' Terry Lee holds the newly mummified big toe of Nick Griffiths in a handout photo. Former British Marine Griffiths is set to become the most exclusive member of an already exclusive club when he visits the Downtown Hotel in Dawson City to sip a so-called sourtoe cocktail; a shot of whisky with a mummified human toe in it. (THE CANADIAN PRESS/Downtown Hotel, Dawson City, Yukon)

WHITEHORSE - An British man who lost several toes to frostbite in Yukon is now back in the territory for a reunification of sorts.

Former British marine Nick Griffiths is set to become the most exclusive member of an exclusive club when he visits the Downtown Hotel in Dawson City to sip a so-called sourtoe cocktail; a shot of whisky with a mummified human toe in it.

This cocktail will contain Griffiths' own big toe, which was amputated along with two other toes, after he suffered severe frostbite while taking part in a nearly 500-kilometre endurance race across Yukon in March 2018.

Downtown Hotel general manager Adam Gerle says Griffiths will be the first person to tipple his own toe.

The sourtoe was first created in 1973 and has been served more than 90,000 times since.

Drinkers are welcome to either sip or shoot the whisky, but if they want to join the sourtoe club, rules require that the mummified toe must touch their lips.

Griffiths learned about the sourtoe story while recovering in hospital in Whitehorse awaiting return to his hometown of Bolton, England, where the frostbitten toes were removed, Gerle says.

Griffiths arranged to have his big toe sent back to Dawson City, where it was enthusiastically received.

The hotel's existing toe stock had been deteriorating and staff were in search of new digits, especially big toes, which the hotel's sourtoe specialist Terry Lee described at the time as “the most disgusting and popular with the customers.”

It took about six weeks to mummify Griffiths' toe in salt after it was received and Gerle says Griffiths has returned to experience the finished product.

“He is returning to do his own toe, like he promised,” says Gerle.

“He lost his toes in the Yukon and now he is coming back to reunite with them.”

When the hotel learned of Griffiths' intended donation it said in a statement that it would foot the bill for his return so Griffiths could claim the rare distinction of sampling his own toe, and being the first whose lips will touch it.

This report from The Canadian Press was first published Sept. 23, 2019