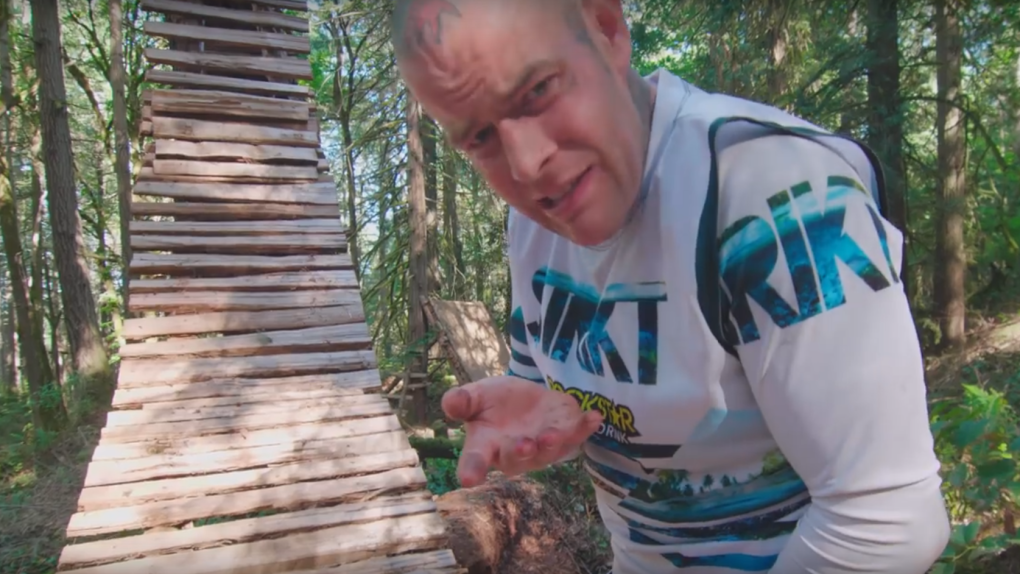 Pro mountain biker Jordie Lunn laughed as he described how he only suffered minor damage to “my undercarriage.”

Professional mountain biker Jordie Lunn is grateful his personal “undercarriage” is intact after appearing in a video that shows him plunging down a nearly vertical homemade ramp in the woods.

“Had my family and friends questioning me on that one,” he said, referring to the third video in his series entitled “Rough AF.”

The series features plenty of awe-inspiring stunts but his latest video features one sure to make your jaw drop.

Lunn and his team built a massive wooden ramp attached to a massive tree on Vancouver Island, then made a video of him riding down it at a fantastic speed.

He not only survived, but did it nearly unscathed.

Lunn now laughs about only suffering minor damage to “my undercarriage” in the stunt that he initially deemed too dangerous.

“Actually had backed out of it once. We went in there, got all set up to shoot, I was at the top on my bike and it just didn’t quite feel right,” he told Pink Bike, a cycling and mountain bike news website. “Definitely was a move I wasn’t going to drop on if I wasn’t feeling it.”

But after some adjustments, he made the drop several weeks later.

Pain is nothing new for the 35-year-old pro biker whose litany of injuries includes: “Broken bones and stuff —legs and arms and hands and feet and collar bones.”

Additionally, Lunn and his team spend “thousands of hours of work” creating his YouTube videos.

The videos have paid off for Lunn, who is sponsored by such brands as Rocky Mountain Bikes, SRAM, RockShox, Truvativ and RockStar Energy,

The B.C. daredevil started BMX racing when he was only 11 and began mountain bike racing when he was 15, according to Rockstar Energy’s website. That’s when he said he started to dabble in cross country, downhill racing and, eventually, the freeriding he does now.

But, despite what viewers who had watched the video more than 417,000 times as of Tuesday, might think, he still fears trying something new.

“Just gotta get up there and push yourself over the edge,” he said. Pun intended.