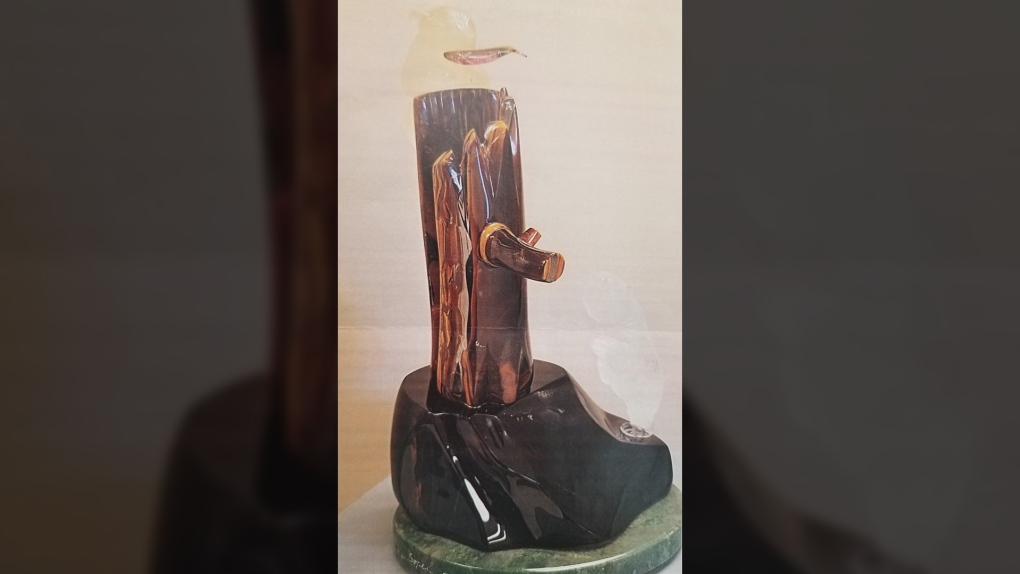 The statue was stolen from the Mary Winspear Centre sometime between 11:30 a.m. and 1 p.m. on Fri, Aug. 3, according to Sidney-North Saanich RCMP. (Handout)

A unique and pricey sculpture was stolen from a Sidney community centre last week, the latest such art theft on the South Island.

The statue was stolen from the Mary Winspear Centre sometime between 11:30 a.m. and 1 p.m. on Friday, according to Sidney-North Saanich RCMP.

It was being showcased at the centre as part of Sidney's "Sculpture By the Sea" event when it was stolen by someone who apparently just walked off with it, RCMP say.

Artist Lyle Sopel's one-of-a-kind statue features two quartz bears on a tree made from tiger's eye. The base of the piece is made from jade, and the bears are holding a quartz fish.

Investigators are looking into whether there is any surveillance video of the art heist.

It's just the latest theft of an unusual art piece on southern Vancouver Island in recent months.

In June, thieves made off with a four foot by five foot aluminum dragon sculpture stolen from Nanaimo's Maffeo Sutton Park.

The sculpture later turned up in a library parking lot wrapped in blankets, with its whereabouts remaining a mystery.

"We don't have any reason to believe that any of these are connected, but it does seem really suspicious that in the last six to eight weeks we've had all of these items taken," said Manseau.

Investigators from detachments around Vancouver Island plan to get together to determine whether there's a link between the thefts, or if they're all one-off events.