Bear and cougar encounters down in Sooke, but experts say don't get complacent

Sooke is known for its breathtaking beauty, rural location and of course, up-close wildlife encounters.

But this year, the community says the number of run-ins with bears and cougars is actually down from previous years.

Both the BC Conservation Officer Service and Wild Wise Sooke, a human-wildlife education group, say conflicts are down this summer and fewer bears and cougars have been seen wandering into human-populated areas.

"Everybody's been really getting the message on how to secure their garbage and the bears, I think are grateful for it," said Webb.

It's in stark contrast to other parts of the province that have seen high-profile interactions like a cougar attack on a child in Lake Cowichan in late spring and a grizzly bear attacking a Quadra Island man earlier this month.

Webb said Wild Wise has been spreading its message in Sooke, telling residents to lock up bear bait like garbage and to pick fruit trees. 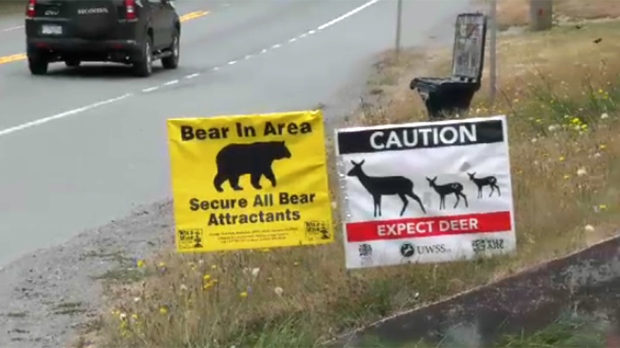 A roadside sign on the way into the community reminds visitors that "Sooke is bear country" and asks them to manage their attractants.

As for cougars, there were a fair amount of sightings in late winter and early spring but those have since dropeed off, with the exception of a cat spotted on Grant Road in the last few weeks.

"The idea with that cougar, we thought, is that it had a ntural prey item it was returning to consume over a few days," said Webb, adding that the cougar's natural behaviour is a good sign.

Busineses in the area say they've been doing their part to ensure a low number of encounters this year.

"We usually try to take those precautions around here to lock our garbages up and try to limit the scent for them," said Scot Taylor, owner of Stickleback West Coast Eatery.

As for Sooke's improved habits, "I think there's probably been a little bit better education for the public and people are probably a little bit more aware of their own garbage," Taylor said.

BC Conservation Officer Scott Norris said bear calls can dip in the summer when there's a good crop of berries available, but reminded Sooke residents not to get complacent because bears will often return in late summer or fall to put on fat for winter.

Anyone who owns fruit trees is reminded to pick the trees often or fence them off and of course, either keep their garbage cans indoors or where a bear can't access it.

Other attractants like greasy barbecues should also be cleaned or kept indoors, and outdoor chicken coops should be kept secure so bears cannot access them.