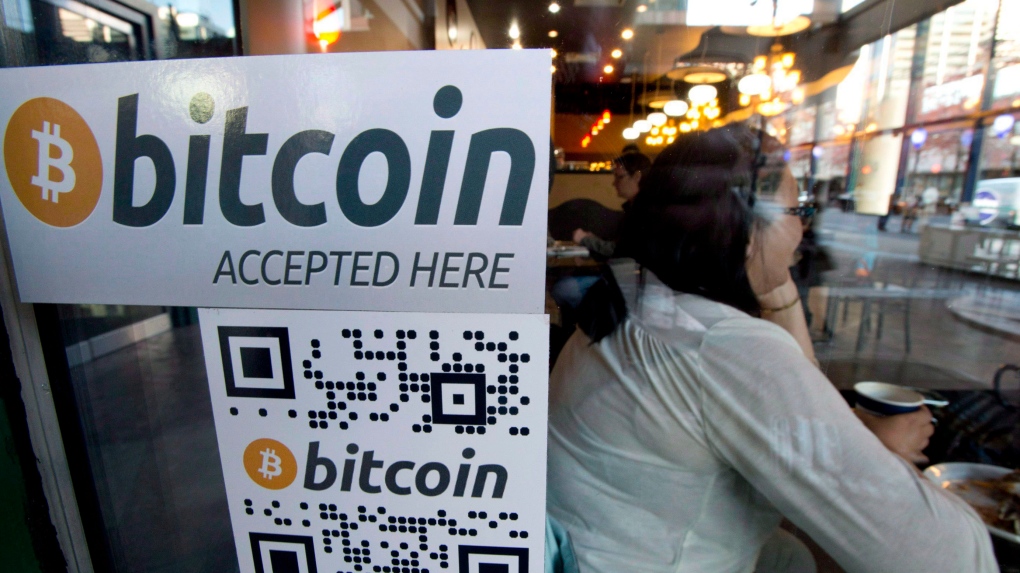 A Bitcoin ATM sticker is on the window of a shop in downtown Vancouver, on Oct. 28, 2013. (Jonathan Hayward/THE CANADIAN PRESS)

VANCOUVER - As British Columbia's securities regulator advises them to contact lawyers, users of the now-seemingly-defunct Nanaimo-based cryptocurrency trading platform ezBtc.ca say they're skeptical that they'll ever get their money back.

On Monday, the B.C. Securities Commission took the unusual step of publicly commenting on an ongoing investigation.

Elise Palmer, a spokesperson for the commission, said it had "received several complaints" about ezBtc and was investigating, adding that "customer assets are at risk."

"Anyone who invested through ezBtc should consider consulting a lawyer about their options for retrieving their money," Palmer said in a statement.

In July, CTV News Vancouver reported on numerous online complaints from users of ezBtc who said the company had made it difficult or impossible for them to withdraw their funds.

One of those users was Rob Johnston, who deposited Bitcoin into his ezBtc account in August 2018, sold it for Canadian dollars, and requested a withdrawal of roughly $2,600. He still has not received it, and says all public communication from the company and its owner and president - David Smillie - stopped in July.

"Nobody knows where he is, but somebody has deleted his Twitter and LinkedIn profiles since then and also changed the DNS entry of the ezbtc.ca site, so that is well and truly broken," Johnston told CTV News in and email.

The apparent shuttering of the platform and apparent disappearance of its once-vocal owner and president are some of the reasons Johnston says he doubts contacting lawyers - as BCSC suggests - will be helpful.

"I don't think a class action would be fruitful as I don't believe that there are any assets to seize," Johnston said.

As evidence, he pointed to a recent decision in British Columbia's Civil Resolution Tribunal. The applicant to the tribunal was Nicholas Greer, and the respondent was 1081627 B.C., Ltd. - the numbered company that does business as ezBtc.

The reason for the petition is listed as an unpaid invoice in the amount of $5,000. Greer asked for - and the tribunal granted - a default decision in his favour because the respondent did not reply to the dispute notice.

"Having reviewed the evidence, I am satisfied, on the balance of probabilities, that the respondent(s) received the dispute notice and did not respond to it by the deadline set out in the tribunal’s rules," tribunal member Kathleen Mell wrote in the default decision.

To Johnston, the fact that that company didn't pay the bill in the first place, as well as its lack of response to the tribunal, suggests the funds weren't there.

"People with money can pay their bills," Johnston said.

Other users of the ezBtc platform appear to be more optimistic than Johnston that they will be able to get their money back.

One user, who asked not to be named in this story, told CTV News he had been trying to withdraw more than $10,000 from his account for months. He said the BCSC's announcement that it is investigating the company gives him a renewed sense of hope that "at least a portion of users' funds might be returned."

Beginning in late October, ezBtc's Facebook page became more active, but the posts were not from Smillie or anyone employed by the company. Instead, they came from a former contractor who The Canadian Press identified as Larry Cameron.

Most of Cameron's efforts, as documented on the ezBtc Facebook page, have been focused on tracing cryptocurrency transactions from the company's platform in an effort to determine where users' deposits went.

Neither The Canadian Press nor CTV News Vancouver has been able to reach Smillie for comment. None of the allegations against Smillie or ezBtc have been tested in court.

EzBtc is not the first British Columbia-based cryptocurrency exchange to apparently close its doors while owing users significant amounts of money.

On the same day that it publicly acknowledged its investigation into ezBtc, the BCSC also announced that it had applied for and received a court order appointing an interim receiver to preserve and protect assets belonging to Vancouver-based Einstein Exchange, another cryptocurrency platform.

"The materials filed in court noted that the BCSC had received numerous complaints about customers being unable to access their assets on Einstein Exchange, and on October 31 had been told by a lawyer representing the trading platform that it planned to shut down within 30 to 60 days due to a lack of profit," the commission said in a news release.

The court appointed Grant Thornton Limited as interim receiver on Nov. 1. An affidavit posted to the receiver's website suggests Einstein Exchange owes more than $16 million to its users.

On Thursday, Grant Thornton posted an update on its website thanking users of the platform for their patience with the receivership process.

"The interim receiver has received a high volume of inquiries from customers who have holdings with the Einstein Group," the update reads, in part. "We understand and fully sympathize with the frustration of customers who are trying to understand the current situation and inquire about the status of their fiat currency and cryptocurrency."

While each case is different, the issues with ezBtc and Einstein Exchange each come in the wake of the demise of another, much larger Vancouver-based exchange, QuadrigaCX.

QuadrigaCX sought creditor protection after its founder and chief executive died suddenly late last year, leaving its employees unable to locate millions of dollars worth of cryptocurrency, according to court filings. Former users of the platform claim they are owed more than $214 million in cash and cryptocurrency.