With violent attacks in B.C. hospitals on the rise, the nurses’ union has launched a campaign of chilling ads to call attention to a situation they say is only getting worse.

The BCNU unveiled its latest ad campaign this month titled “Violence. Not Part of the Job.”

In the ads, frightened nurses are heard calling 911 operators to report attacks at their facilities, while viewers are shown graphic scenes including pools of blood, smashed glasses and a toppled wheelchair in a hospital hallway.

The ads echo the very real possibility of violence some nurses say they’re faced with every day on the job.

“Personally, I’ve been kicked and punched and pinched and slapped, spat at and urinated on,” said Christina Ledger, an ER nurse at Royal Jubilee Hospital in Victoria. “There was a lady, and I kept hearing this funny noise, and I went over to check out what she was doing, and she said she was sharpening her knives for the night nurse.”

The union has also released a photo of a Vancouver nurse’s thumb after she was attacked and bitten by an elderly patient. 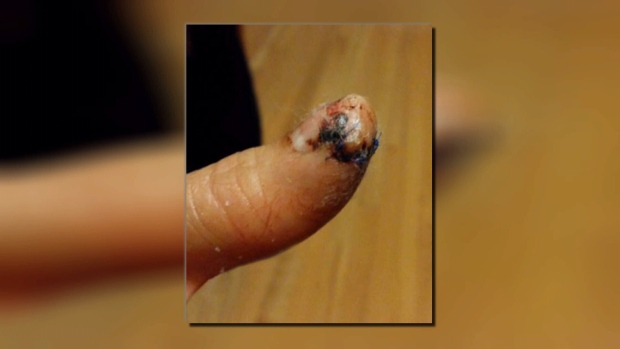 But it’s not just stories they’re going off of – B.C. nurses say statistics prove attacks are on the rise.

According to Worksafe BC, the injury rate for health care workers shot up by 50 per cent from 2006 to 2015.

That averages out to 26 nurses per month suffering injuries from workplace violence in British Columbia.

The BCNU says that violence is entirely preventable.

“The nurses are very concerned that there are not adequate safety measures in place to protect them or even protect the patients,” said Christine Sorensen, BCNU Vice-President.

Nurses are asking for more education in dealing with aggressive patients as well as safety officers at every health facility – not just hospitals.

They also want to adopt a hands-off approach during dangerous or code white situations.

Island Health said it all comes down to resources and training.

“In some sites, yes, we have specific training. Not in very many sites do we have what we would call advanced team response for a code white,” said Island Health spokeswoman Tracey Newlands. “It does take a significant amount of training for people to be competent in going hands on.”

The timing of the ads, about six weeks before a provincial election, is not a coincidence.

The union says it is trying to get the government back to the bargaining table over an issue that’s turning nurses into patients.

The Ministry of Health did not respond to CTV News’ requests for comment Monday.