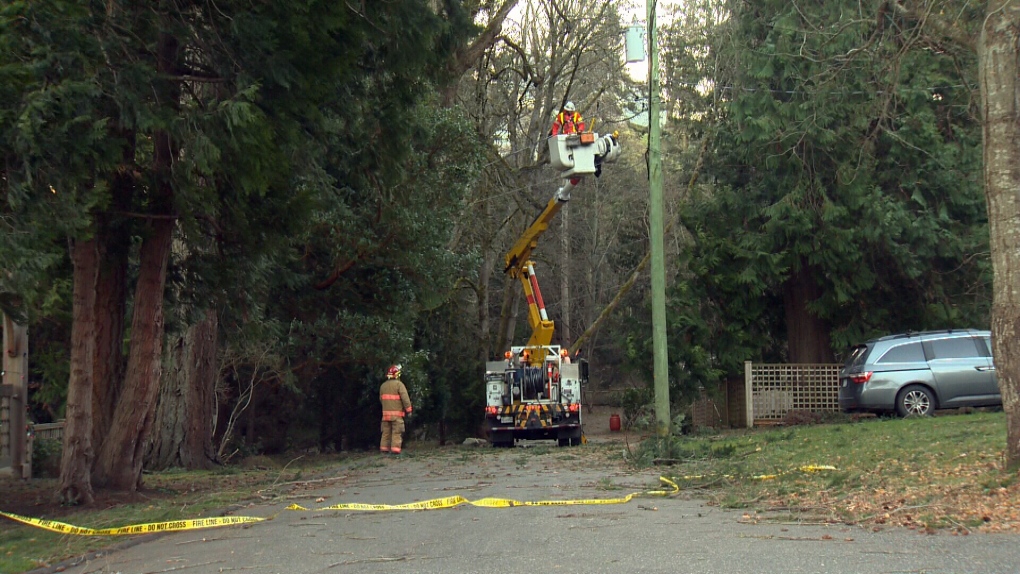 The West Coast could be bracing for a stormier winter than normal as the climate pattern La Nina is back for a second straight year.

Marked by the natural cooling of sea surface temperatures in parts of the Pacific Ocean, La Nina intensifies winds and rainfall.

In preparation, BC Hydro has increased their vegetation management budget to tend to hazardous trees that may fall and cause power outages during a storm.

"We know we will never eliminate outages completely," said Ted Olynyk, BC Hydro's Island spokesperson. "What we hope to do is lessen the impact on our customers - whether that's reduce the frequency, the duration of outages, or provide them the right information."

British Columbia has more trees per kilometre of utility line than anywhere else in North America, said Olynyk.

And on Vancouver Island, he said there are more trees per kilometre of utility line than anywhere else in the province.

"We know we're going to get more storms," said Olynyk. "We have to make sure we're doing more to protect the system and doing our best to keep the lights on for our customers."

It can be especially challenging for crews to access power lines running through wilderness areas to remote communities, said Olynyk.

Sometimes utility poles need to be transported in by helicopter, or new roads need to be punched in to access fallen trees.

"Rain conditions may not be favourable to do any flying," said Olynyk. "Then it takes longer to determine what the problem is and get crews in there."

Stormy winter seasons are nothing new to the Tla-o-qui-aht First Nation, located on the west coast of Vancouver Island near Tofino.

"For the most part, it's something that we grew up with around here," said Elmer Frank, Tla-o-qui-aht First Nation emergency preparedness coordinator. "We all just learned to be prepared for the worst."

The nation has evacuation plans in place in the event of high tides or river floods that puts their communities at risk, said Elmer.

On an individual level, Frank said many families have back-up generators in the event of a power outages.

"We've just learned to adapt," he said. "Our winters are getting stronger and I think that everyone has been getting more prepared themselves."

Due to changing weather patterns, the Canadian Coast Guard advised small vessel operators leaving docks to share their trip plans with a family member or someone on shore.

"Owners should also check on their vessels regularly over the winter to help prevent storm damage, adding additional lines and anchors, ensuring scuppers are cleared, and clearing snow and ice when safe to do so," the Coast Guard said. "Under Canadian law, vessel owners are responsible for their vessel at all times."

In the event of an emergency, mariners should contact the Coast Guard radio on VHF channel 16.

The information provided will help the Coast Guard to prioritize the response.

"Risk to life is always our highest priority," said the Coast Guard. "Some of the other factors we take into account include: type and size of vessel, location, and how much fuel is onboard."

Tasked by the Joint Rescue Coordination Centre, the Coast Guard responds to around 3,000 search and rescue incidents on B.C.'s coast every year.

While there are fewer calls in the winter because fewer vessels are on the water, weather conditions make the search and rescue calls higher risk, said the Coast Guard.

Having gone through an extended drought period this summer, Olynyk said that trees are still in distress from the lack of moisture. Vegetation management and residents' patience helps, but Olynyk said there are some things out of our control.

"We realize that's kind of the contract we have with Mother Nature," he said "We're going to get these big storm events and we have to make sure we're all prepared to do our best to handle them. At the end of the day, these storm events are just snooze alarms - we have to realize we live in a very active seismic area. It's one thing to prepare for storm events that can knock out power for 24 to 72 hours, or longer, but it's making sure we can all be prepared for when the big one hits again."