BC Ferries seeks support for full electrification of hybrid vessels 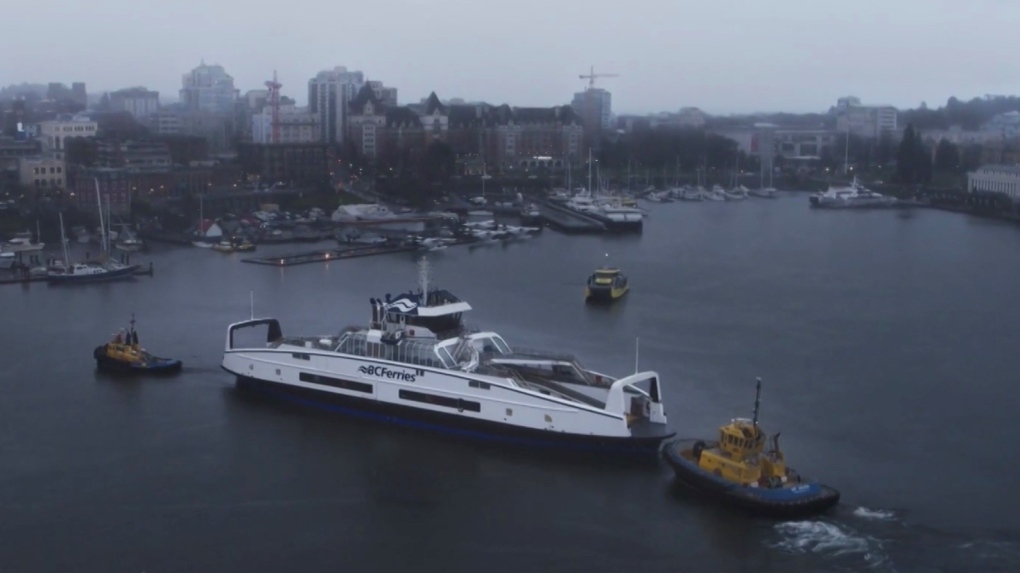 A hybrid-electric Island Class BC Ferries vessel is seen in Victoria's Inner Harbour.

VICTORIA -- BC Ferries is seeking letters of support from coastal communities to aid in securing federal funding for the Island Class Ferry Electrification Project.

The project goal is the full electrification of BC Ferries Island Class vessels, which are currently hybrid powered. The project is part of BC Ferries’ long-term emissions reduction strategy that aims to transition the fleet away from fossil fuels and reduce greenhouse gas (GHG) emissions.

In late December, Nanaimo city staff were contacted by BC Ferries to see if the municipality was interested in providing a letter of support towards the project.

On Monday night, Nanaimo council was more than willing to answer that call and endorsed a letter stating their support and approval of such a project.

The call comes as BC Ferries prepares a response to a direct call for proposals from the Federal Government to the industry for innovative projects that can be part of Canada’s economic recovery from COVID-19.

In a statement provided to CTV News, BC Ferries acknowledged that it was working on a proposal to submit to the Federal Government in regards to the project.

“The Island Class Electrification Program is an opportunity for the Federal Government and BC Ferries to take definitive climate action while creating economic opportunity in British Columbia and Canada,” said the company.

“BC Ferries is putting together a proposal to present to the Federal Government to seek federal stimulus funding to accelerate the program to provide shore charging infrastructure sooner and associated upgrades to the vessels.”

Currently, BC Ferries has two electric-hybrid Island Class vessels, which went into service last year. Four more electric-hybrid vessels are on order and are due to arrive in late 2021 or early 2022.

Though the new ships are better for the environment compared to the ones they replace, BC Ferries says they haven’t reached their full potential to benefit the environment according.

“The Island Class are battery-equipped ships designed for full electric operation once shore charging infrastructure and funding becomes available,” said BC Ferries. “In the interim, the ships have been fitted with hybrid technology that is more sustainable than existing diesel operated vessels, but not as environmentally friendly as battery operation.”

The scope of the project is ambitious and includes the conversion to up to 18 terminals associated with eight service routes and six Island Class vessels. The upgraded terminals and ships would allow the Island Class ferries to rapidly recharge batteries while passengers and vehicles unload and reload before setting sail again.

The total estimated cost of the project is $282 million.

Some of the benefits outlined in the project are broad-reaching and would affect coastal communities, the economy, the environment and the transportation sector.

Greenhouse gas emissions would be reduced by 18,000 tonnes of CO2e (the equivalent of 3,800 vehicles on the road) per year when the full Island Class program of six vessels is built out.

The move towards quieter ship operations will also help reduce noise impacts on local communities and marine life, such as endangered Southern Resident Killer Whales, Pacific salmon and cetaceans, according to BC Ferries literature provided to Nanaimo city council.

The project will also provide numerous skilled jobs during the upgrade. The city sees it as a win-win for both the economy and the environment, as stated in city’s draft letter to the Federal Government.

“Electrifying the Island Class Ferries and its associated terminals, such as the Gabriola Island terminal in downtown Nanaimo, would help the city reduce greenhouse gas emissions,” wrote the municipality.

“In addition to emissions reduction, we see the electrification of the Island Class as a valuable opportunity to collaborate with BC Ferries on a community decarbonisation strategy that incorporates local resident and business perspectives. Since the Island Class ferries serve a number of inter- island communities, we see this project as an opportunity to also strengthen community resiliency and adaptability,” said the city.

The Island Class Ferry Electrification Project could begin in 2022 if funding comes through from the Federal Government and would take about three years to complete according to BC Ferries.