BC Ferries cancels nearly all sailings due to high winds 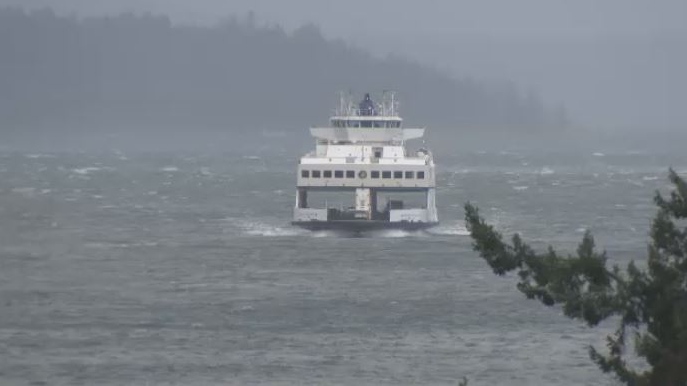 VICTORIA -- BC Ferries has cancelled many sailings Friday due to adverse weather.

As of approximately 1 p.m., almost all sailings between Vancouver Island and Vancouver have been cancelled due to high winds and rough conditions.

The cancelled routes include the Horseshoe Bay to Departure Bay route, the Tsawwassen to Duke Point route, and the Swartz Bay to Tsawwassen route.

All Friday afternoon and evening sailings, from 3 p.m. to 10:45 p.m., have been cancelled due to safety concerns.

"The safety of our passengers and crew is of primary importance to us," said BC Ferries in an update Friday. "We don’t take the decision to cancel sailings lightly, as we know customers rely on us to get to their destinations. We will resume service as soon as it is safe to do so."

On Thursday, Environment Canada posted wind warnings for much of B.C.'s coast. While wind warnings have been lifted on Vancouver Island, weather alerts remain posted for the Southern Gulf Islands and Metro Vancouver Friday.

Across the Southern Gulf Islands, winds between 70 km/h and 90 km/h are expected to gust through the region Friday morning. The winds will then ease Friday afternoon before returning Friday evening.

In Metro Vancouver, winds of up to 90 km/h are expected in the central region, in the North Shore, and in southwest Metro Vancouver – including Richmond and Delta.

The winds are expected to ease around noon before picking up again in the early evening. Environment Canada predicts that the gusts will die down by early Saturday morning.

For the latest updates on BC Ferries scheduling, visit the ferry service's website here.

#ServiceNotice #Tsawwassen #SwartzBay #CoastalCelebration has cancelled its first round trip due to adverse weather. The 7am sailing out of Swartz Bay & the 9am sailing out of Tsawwassen will not travel. More details here: https://t.co/gMU6G4edC8 ^ta