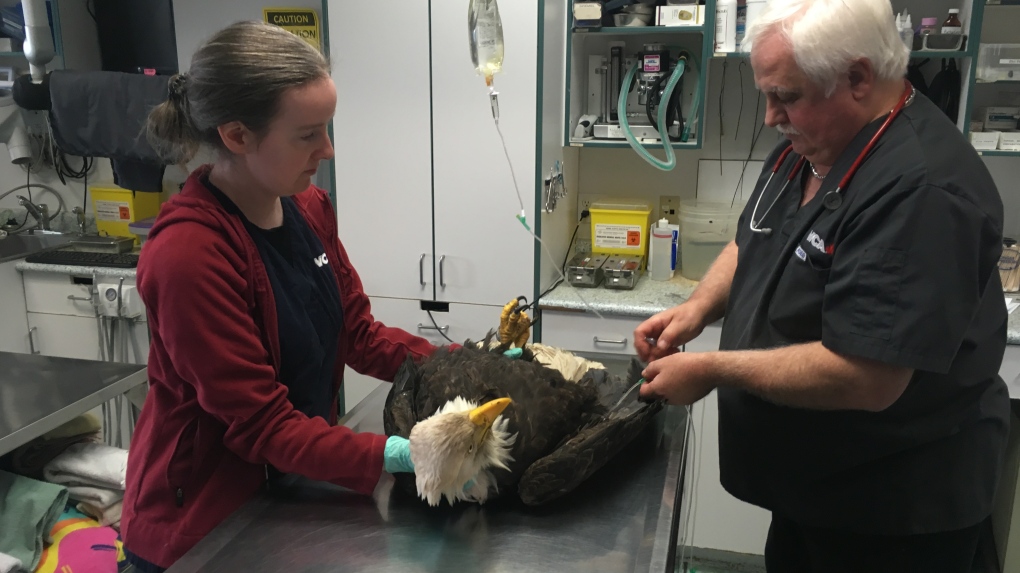 Staff at a Nanaimo vet clinic work to save an eagle that had been found poisoned on the South Island. Jan. 21, 2019. (CTV Vancouver Island)

VANCOUVER - Hunting season in British Columbia is having unintended toxic consequences for birds of prey and two local raptor experts say it's time to get the lead out of ammunition to stop them from being poisoned.

The Orphaned Wildlife Rehabilitation Society, or OWL, in Delta, B.C., is currently treating two eagles for lead poisoning and it can see up to 20 raptors each year, said long-time raptor caretaker Rob Hope.

The birds ingest lead when they scavenge the carcasses of animals killed with lead shotgun pellets or rifle bullets that contain the toxin, Hope said.

The Canadian government banned lead for hunting waterfowl two decades ago, and non-toxic shot is now required to hunt most migratory game birds across the country. Lead shot is also prohibited for all types of hunting in 55 national wildlife areas.

But pellets and bullets containing lead are still widely used to hunt large game and upland game birds, such as grouse or pheasant.

It's unclear how many birds are being poisoned and the source of the lead poisoning is hard to pin down, said John Elliott, a research scientist with Environment and Climate Change Canada in B.C.

In addition to spent ammunition, the birds can also ingest lead through fishing tackle.

But the increase in lead-poisoned raptors at OWL generally coincides with the hunting season, said Hope, with ailing birds being delivered from across the province between October and March.

Hope said he would like to see hunters switch to non-lead ammunition, adding he's not against hunting.

Myles Lamont, a wildlife biologist based in Surrey, B.C., said the soft metal of the bullets fragment upon impact, almost like a microplastic.

“They just disintegrate, and so you get this powderized lead all through the carcass, which is undetectable. You never actually see it unless you use an X-ray machine.”

Some affected birds don't show symptoms, while others are lethargic, starving or have trouble breathing.

Elliott said it takes a small amount of lead to poison the birds.

“An eagle only has to get a few of those fragments,” he said.

“If it gets into their system, into the digestive tract and starts to be absorbed, it will slowly kill them.”

The Canadian government estimates that 40 to 80 tonnes of lead are used every year for hunting activities in Canada.

Lamont, who is a hunter, said he hopes that urging change within the hunting community could prompt a provincewide ban on lead ammunition.

He said he's reached out to the BC Wildlife Federation, which has 43,000 members and represents resident hunters in B.C., in order to spread the word.

“This is sort of an emerging issue,” said Tina Coleman, the director of corporate operations for the wildlife federation, adding she's invited Lamont to speak with members at future engagement events.

“If this is a problem, we should be looking at it, educating ourselves, and every citizen should make the right choice.”

There is a learning curve for hunters switching to non-lead alternatives, such as copper bullets. They are ballistically different than lead, with different weights and trajectories, said Coleman.

“If you've been doing something the same way for 10 or 20 years, you're not likely going to want to change,” she said.

“There would have to be huge evidence of why it's so bad,” Coleman said.

Elliott helped initiate an ongoing, nationwide study of lead poisoning in avian scavengers for Environment and Climate Change Canada in 2017.

Since much of the Canadian wilderness is remote, it's been difficult for researchers to collect enough carcasses of scavenging birds to assess the extent of the problem, he said.

But, he said, there's probably a “fair number” of birds being poisoned.

He also contributed to a study of bald and golden eagles in Western Canada in a survey conducted between 1986 and 1998, which found 10 per cent of 546 eagles had tissue with lead levels consistent with poisoning, while five per cent had elevated but non-lethal levels.

The study found golden eagles were twice as likely to be affected than bald eagles.

Golden eagles inhabit expansive rangelands and mountain valleys, and Elliott said the source of poisoning is likely lead bullets or pellets lodged in the carcasses of upland game birds and large game.

The B.C. government said it's not contemplating expanding the existing federal restrictions on lead shot, which apply to hunting waterfowl and migratory birds.

“We are monitoring whether federal action will be taken after the federal government initiated an engagement process and published a report in 2018,” Dawn Makarowski, a spokeswoman for the Ministry of Forests, Lands, Natural Resource Operations and Rural Development, said in a statement.

No one from Environment and Climate Change Canada, which published the report, could immediately be reached for comment.

A 2018 article published by the American Journal of Medicine found that people who eat meat harvested with lead ammunition are at risk of developing unsafe levels of lead in their blood.

“My interest is seeing the hunting community embrace the literature and the science, that say even if you don't care about the animals that feed on your gut piles, consider this from this your own family's safety perspective,” Lamont said.