VICTORIA -- The B.C. government is warning residents that Asian giant hornets, which first appeared on Vancouver Island last year, could return this spring and summer.

The Asian giant hornets were first discovered in B.C. in the Nanaimo region in August.

Concerns about the predatory hornets remained until September when a group of local beekeepers found and destroyed a nest in the Nanaimo area.

While the giant hornets remained dormant in Western Canada in the fall and winter, the B.C. government is warning residents of a recent return of the insects in Washington state.

Two Asian giant hornets were discovered near Blaine, Wash. in December, and one was found in White Rock in November.

“These findings indicate a probability that nesting hornets are overwintering in the area,” the Ministry of Agriculture said in a statement Friday. 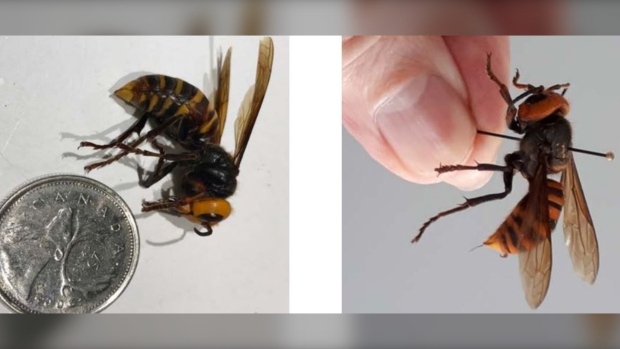 The ministry says residents of wooded areas near the Canada-U.S. border should be particularly aware of the possible return of the insects.

Meanwhile, residents of 0 Avenue from Surrey to Aldergrove are being given pest-alert notices and informational packages about Asian giant hornets, as they are the most likely to see them first.

“Asian giant hornets are large compared to other hornets, with noticeably large orange heads and black eyes,” said the ministry.

Asian giant hornets measure approximately 3.5 centimetres in length, while queens can be as long as four to five centimetres with a wingspan of four to seven centimetres.

The B.C. government notes that the hornets may sting people if their nest is disturbed, which “can be hazardous to peoples’ health.”

Anyone who spots an Asian giant hornet is asked to report the sighting to the Invasive Species Council of BC at 1-888-933-3722 or through the “Report Invasives” online application here.