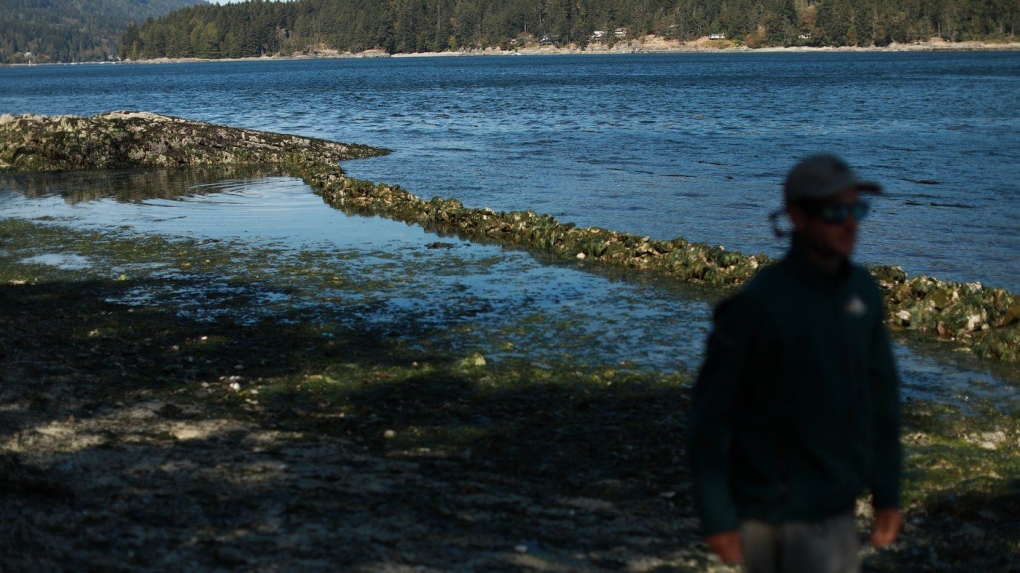 High tide rolls in as a Parks Canada employee looks over the clam bed restoration while on a Salish sea garden tour on Russell Island, a 32-acre Gulf Island National Park near in Salt Spring Island, B.C., Thursday, Sept. 8, 2022. (THE CANADIAN PRESS/Chad Hipolito)

Little to no rainfall over the past five weeks in several areas of British Columbia has prompted a warning from the Ministry of Forests about drought.

The ministry says Vancouver Island, the inner south coast and the northeast corner of the province have reached the second-most severe level of drought on a five-point rating scale.

A statement from the ministry says those regions are ranked at Drought Level 4, meaning conditions are extremely dry and will likely have unfavourable impacts on everything from jobs to ecosystems.

Much of the Peace region, a stretch of the eastern Pacific range from the Skagit Valley north to Merritt and the Pemberton areas, as well as the Kettle River basin north of Grand Forks are all ranked at Drought Level 3.

The statement says all water users in areas covered by drought levels 3 and 4 are urged to reduce water use and if conservation measures don't show results or drought conditions worsen, water licensees may be ordered to scale back their operations.

Water licensees in B.C. are allowed to use groundwater for non-domestic purposes, such as irrigation, commercial or industrial uses, but the ministry says the Water Sustainability Act permits it to alter those licences “to avoid significant or irreversible harm to aquatic ecosystems.”

“Provincial staff are monitoring the situation and working to balance water use with environmental flow needs,” the ministry statement says.

This report by The Canadian Press was first published Sept. 29, 2022.

King Charles' whirlwind three-day trip to Canada in May 2022 cost Canadian taxpayers at least $1.4 million, or well over $25,000 per hour, according to documents obtained by CTVNews.ca.

Edmonton mom says she was beaten, robbed in random attack outside LRT station

An Edmonton mom opened up about a random attack while she was waiting for a train that left her bruised, concussed and questioning whether it's safe to take transit in the city.

An Independent Alberta MLA has been ordered to pay $1,500 for each day he spent trying to break into the province's vaccine portal to prove the website wasn't perfectly secure, a judge ruled on Tuesday.

Prime Minister Justin Trudeau says everyone in China should be allowed to express themselves amid protests over severe COVID-19 restrictions.

A Palestinian refugee who made a desperate plea for proper housing in Canada has now been welcomed by a Jewish family in Ottawa.

A 23-year-old Ontario woman has been charged under the provincial welfare services act after a graphic video of a horse being dragged surfaced online. One video shows the horse being pulled with ropes as its back hooves drag along a road.

Royal Bank of Canada signs deal to buy HSBC Canada for $13.5B

Royal Bank of Canada has agreed to pay $13.5-billion in cash for HSBC Bank Canada in what is the largest domestic banking deal on record.

There was only one really false note during the Liberals' otherwise solid performance during the Emergencies Act inquiry and it was played on Minister of Justice and Attorney General of Canada’s David Lametti’s trumpet, writes former NDP Leader Tom Mulcair in an exclusive opinion column for CTVNews.ca.