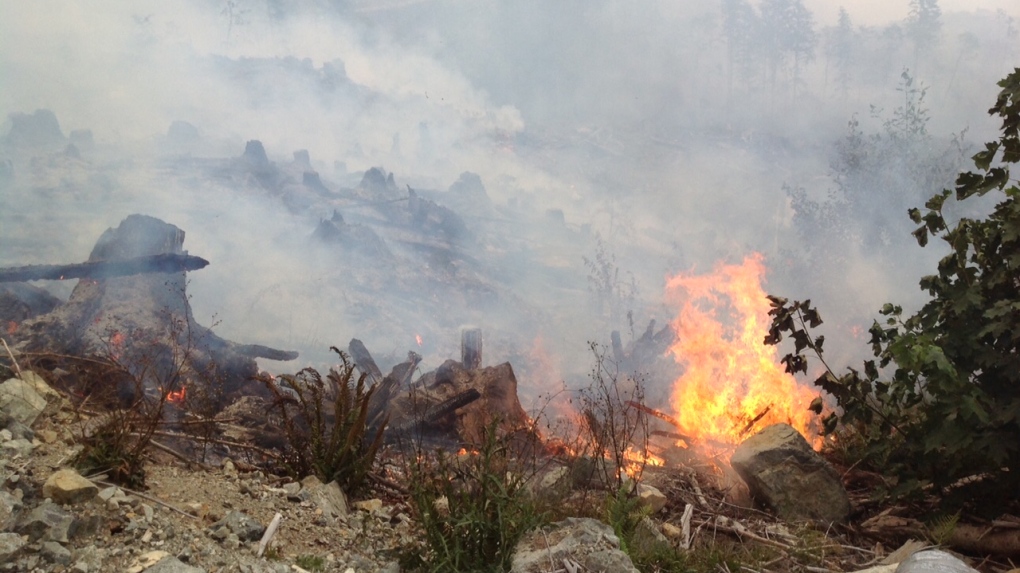 A wildfire is pictured burning near Lizard Lake on Aug. 20, 2015. (BCWildfire.ca)

VICTORIA -- The BC Wildfire Service is urging British Columbians to be safe this long weekend, as warm summer conditions have made for high wildfire risks.

Between April 1 and July 29, the BC Wildfire Service says that it has responded to 239 wildfire calls, an estimated 85 per cent of which were caused by humans.

"We know people want to get out into the great outdoors, but it's important that everyone stay vigilant about fire safety," said Doug Donaldson, Minister of Forests, Lands, Natural Resource Operations and Rural Development in a release Thursday.

"Fighting wildfires can be challenging at the best of times, but managing them in the midst of the COVID-19 pandemic requires BC Wildfire Service staff to operate with even greater care," he said.

Currently, campfires are allowed in areas that the BC Wildfire Service oversees. However, municipalities and parks may impose their own fire bans within their jurisdiction.

The District of Sooke, for instance, has raised its fire danger rating to “extreme” and is no longer allowing campfires, beach fires or backyard burning to take place.

The municipality says that propane fire rings are still permitted. The ban is in place until further notice, says Sooke.

In areas where campfires are allowed, the BC Wildfire Service says that campfires must be smaller than 0.5 metres wide and 0.5 metres tall.

The firefighting service adds that campfires should not be lit in windy conditions, as wind can blow embers and start fires in other areas.

Fires should also never be left unattended, and areas around the base of a campfire should be cleared to ensure that flames do not spread.

Always make sure to have at least eight litres of water or a shovel on hand to put out campfire, adds the BC Wildfire Service.

Smokers should also ensure that their cigarette butts are completely extinguished and properly disposed of.

The B.C. government says that conservation officers will be making regular patrols to make sure that campers and park users are following fire guidelines or bans depending on the region.

Anyone who breaks a fire ban could face a violation ticket of $1,150. If convicted in court, an individual could face a fine of up to $100,000 or one year in prison. If a person is found to have started a wildfire, they could also be responsible for paying firefighting costs associated with the blaze.