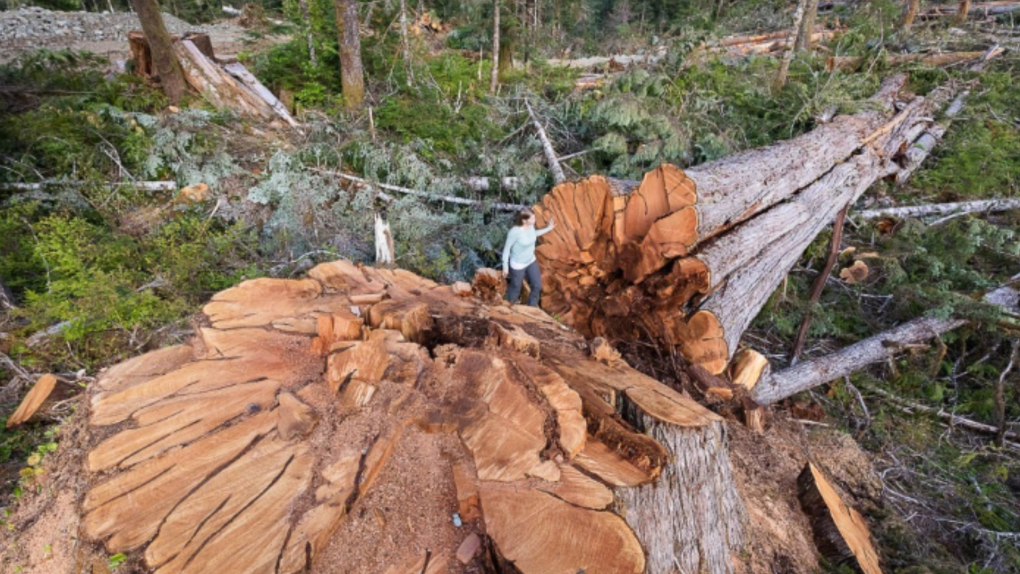 Forests Minister Katrine Conroy says B.C. will hold talks with Indigenous nations and engage others in the forest sector to determine the next areas where harvesting may be deferred. (TJ Watt/Ancient Forest Alliance)

VANCOUVER -- The most at-risk ecosystems should be set aside from logging while British Columbia shifts its forestry policies toward a more sustainable system, says a forester who helped write a provincial report on old-growth forests.

The report last April co-written by Garry Merkel urged B.C. to act within six months to defer harvesting in old forest ecosystems at the highest risk of permanent biodiversity loss.

“There (are) some of those ecosystems targeted for harvesting right now,” he said in an interview this week, six months after B.C. released the report and pledged to implement the recommendations from the panel of two independent foresters who were commissioned to write it. “I do share the impatience of a lot of folks.”

At the same time, Merkel said he doesn't question the government's commitment to implementing the panel's recommendations and the process overall will take years. “This is very much in my mind an intergenerational process that we're working through.”

Old-growth forests are crucial to the overall health of ecosystems in the province, said Merkel, affecting everything from the raindrops that collect in the tree canopy to the water that runs in salmon streams below.

The risk of biodiversity loss is high when at least 30 per cent of the natural old forest in an ecosystem is not kept intact, he said, adding B.C.'s old growth retention targets in some areas are lower than that threshold.

The old growth panel's report says it's projected that almost all of B.C. would be at high risk of biodiversity loss once most of the available old forest is harvested under the current management approach.

Just over 13 million hectares of old forests remain in B.C., according to provincial data. The report notes as much as 80 per cent of that land consist of smaller trees with lower commercial value.

A separate analysis by independent ecologists published and submitted to the province last spring says about 415,000 hectares of old-growth forests that produce the biggest trees with the highest ecological and cultural value remain in B.C. It also says the distribution of large protected areas was “biased towards higher elevation and lower productivity ecosystems.”

The province announced last September it would temporarily defer old growth harvesting in close to 353,000 hectares in nine different areas, while further work was underway to protect up to 1,500 exceptionally large trees.

The deferral areas consist of a combination of old growth and second growth, or trees that are planted or regenerate in previously cleared forests.

Forests Minister Katrine Conroy said in an interview the deferrals protect 196,000 hectares of old growth, and that road maintenance and harvesting second growth are still allowed.

The province was able to act quickly in those areas because it had already been working with nearby First Nations, she added.

B.C. will hold discussions with First Nations and others, including forestry companies, workers and environmental groups, to determine the next areas where harvesting may be deferred, said Conroy.

The Union of B.C. Indian Chiefs and conservation groups in the province wrote a letter last month calling on the government to provide funding for First Nations that would forego revenue in the event of harvesting deferrals.

The letter also requests funding for economic diversification through eco-tourism, stewardship programs and activities consistent with protecting old growth, similar to the plan for the Great Bear Rainforest on B.C.'s north coast.

“We need to be retooling mills all across B.C. to process smaller, second-growth trees,” said Andrea Innes, a campaigner with the Ancient Forest Alliance. “We need to be investing in research and development to make sure that we're staying competitive in the global market and being able to produce high-quality products ... while also making jobs.”

In statements released Thursday, the Ancient Forest Alliance, Wilderness Committee and Sierra Club B.C. say the province has yet to develop an old growth transition plan with key dates and milestones following the panel's recommendation to approve one in six to 12 months.

They urge the government to immediately defer logging for all at-risk old growth and commit to transition funding for First Nations affected by deferrals.

Inness said much of the 353,000 hectares set aside last fall consist of lower productivity forests, and only about 3,800 hectares of that land was previously unprotected, productive old-growth forest that would have been logged otherwise.

The Forest Ministry said in an email the deferral areas contain both old and younger trees because old forests don't always grow in continuous patches.

The proposed timeline in the panel's report was drafted before the COVID-19 pandemic, which has affected the province's work “quite significantly,” said Conroy.

Susan Yurkovich, president of the B.C. Council of Forest Industries, said no one wants to harvest beyond what is sustainable because the future of the industry relies on access to wood fibre at a reasonable cost.

Yurkovich said old growth represents about a quarter of the trees harvested in B.C. each year. But Inness said tens of thousands of hectares of the most ecologically valuable trees are being cut.

About 38,000 jobs are tied to harvesting old growth in B.C., said Yurkovich.

The province needs a clear plan that reflects an array of views, prioritizes forest health and provides stability for everyone from industry to Indigenous communities to tourism operators, she said.

“I value parks and protected areas as well. We would also like to say out loud that we also value the working forest,” she said. “It builds communities, it provides very significant contributions to the GDP of our province and those things fund schools and hospitals and roads.”

This report by The Canadian Press was first published March 12, 2021.