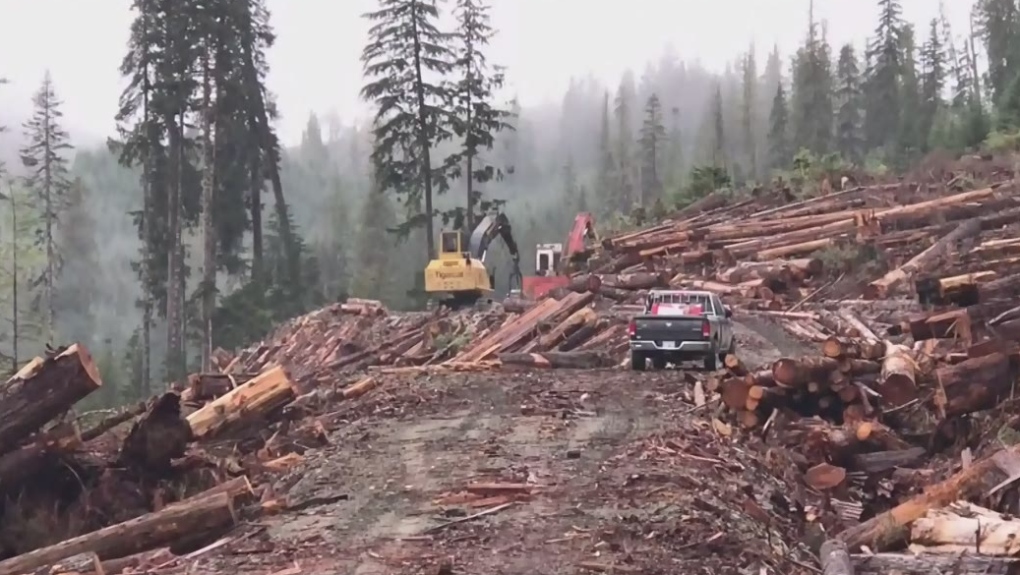 The Forest Practices Board says the investigation stemmed from a 2018 complaint about BC Timber Sales licensees' logging of large old-growth trees in the Nahmint River watershed near Port Alberni. (CTV News)

VICTORIA -- An investigation by British Columbia's forest practices watchdog has found the provincial agency responsible for auctioning timber sale licenses did not adequately protect old forest in an area of Vancouver Island.

The Forest Practices Board says the investigation stemmed from a 2018 complaint about BC Timber Sales licensees' logging of large old-growth trees in the Nahmint River watershed near Port Alberni.

Board chair Kevin Kriese says the findings show BC Timber Sales' forest stewardship plan is not consistent with specific biodiversity objectives that are legally required under the Vancouver Island land use plan established two decades ago.

Kriese says more detailed landscape planning was supposed to provide clear direction on how much and where to conserve old and mature forest, but that planning was never completed and the forest stewardship plan should not have been approved.

He says BC Timber Sales was left with a complicated set of legal objectives to interpret, and the board found it missed important details required to manage for biodiversity in the Nahmint.

The Forests Ministry says it appreciates that the board acknowledged old and mature forests make up 67 per cent of the Nahmint area, and BC Timber Sales' operations are addressing its recommendations.

The board's report recommends that BC Timber Sales not sell any licenses in areas of “high-risk” ecosystems until the province finishes landscape planning to specify the amounts of forest to retain.

“We looked at the remaining forest in the watershed and found there are some ecosystems that could be at risk if more logging takes place in them,” Kriese says in a statement Wednesday.

The ministry says in a statement it's updating the Nahmint landscape plan and adjusting old-growth management areas to “better capture rare and under-represented ecosystems and biodiversity targets.”

The updated landscape will come into effect soon, it says.

The board also determined that an investigation started by the Forests Ministry's compliance and enforcement branch was reasonable. But it was cut short because the branch did not actually have the power to ensure the required objectives of higher-level land use plans are met.

The board is recommending the government fix that gap, Kriese says.

“The current legal framework does not permit government to ensure that (forest stewardship plans) approved in error can be amended, and this does not give the public confidence in government's compliance and enforcement.”

The Nahmint River watershed is within the traditional territory of the Nuu-chah-nulth people and spans just shy of 200 square kilometres.

The Forest Practices Board says its investigation was triggered when members of the environmental organization Ancient Forest Alliance saw BC Timber Sales' licensees harvesting large, old trees in 2018.

The Nahmint Valley is considered a “hot spot” for old-growth trees with high conservation value, the alliance says in a statement.

The alliance says it complained to the board after members found very large old-growth trees had been cut in the area, including ancient cedars and the ninth-widest Douglas fir recorded in Canada.