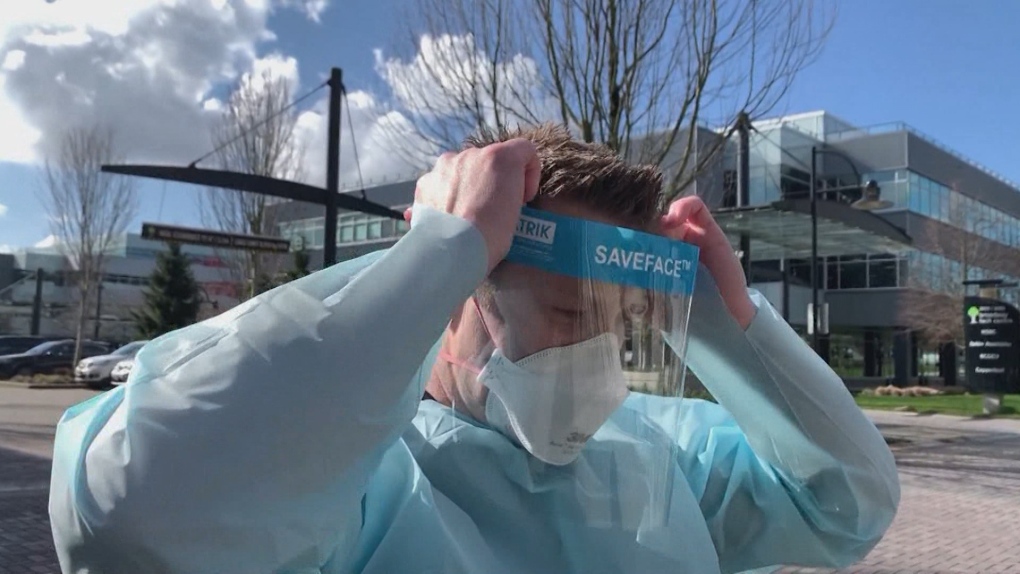 A B.C. paramedic dons equipment that would be worn when responding to infectious disease calls, including gloves, plastic gowns, N-95 masks and full-face visors. (CTV)

VICTORIA -- Millions of respirator masks that British Columbia purchased from a manufacturer in China have been given a stamp of approval by separate labs, making them available for health workers, Health Minister Adrian Dix said.

The respirators are the equivalent to the sought-after N95 masks made by 3M, he said.

B.C. now has a stockpile of three million of the masks, which puts the province in a good position to resume elective surgeries and prepare for a possible second wave of the virus, the minister said.

“This is excellent news,” said Dix. “The new respirator has also passed fluid resistance testing conducted by independent laboratories and has had excellent results in terms of sample fit testing to confirm the respirators seal the faces of the majority of health-care workers.”

He said the new supply is a result of diligent behind-the-scenes efforts of health officials to test and acquire sources of personal protective equipment in a difficult market.

Dix said the supply of the new respirators will reduce B.C.'s reliance on traditional manufacturers of masks which were the subject of intense global procurement efforts.

He said the province is still looking to increase its supply of other personal protective equipment items, including surgical masks, gowns and gloves.

Dix said the Health Ministry has also recently purchased a leading model filtration machine that will be used to test the quality of personal protective equipment the province acquires.

B.C. reported four new COVID-19 cases and there were no deaths.

Provincial health officer Dr. Bonnie Henry said five COVID-19 outbreaks have been declared over in B.C., at long-term care homes and at the Abbotsford Regional Hospital.

Henry said 10 health-care workers were infected with the virus at the hospital, including two who ended up in the intensive care unit.

“I'm just extremely pleased to be able to say that both of them were discharged home.”

There are also two new small outbreaks in office settings.

Henry said both companies were vigilant and the cases were caught early.

This report by The Canadian Press was first published on June 2, 2020.

How safe is using a public restroom during a pandemic? Expert weighs in