B.C. says no 'murder hornet' sightings since May, but traps ready 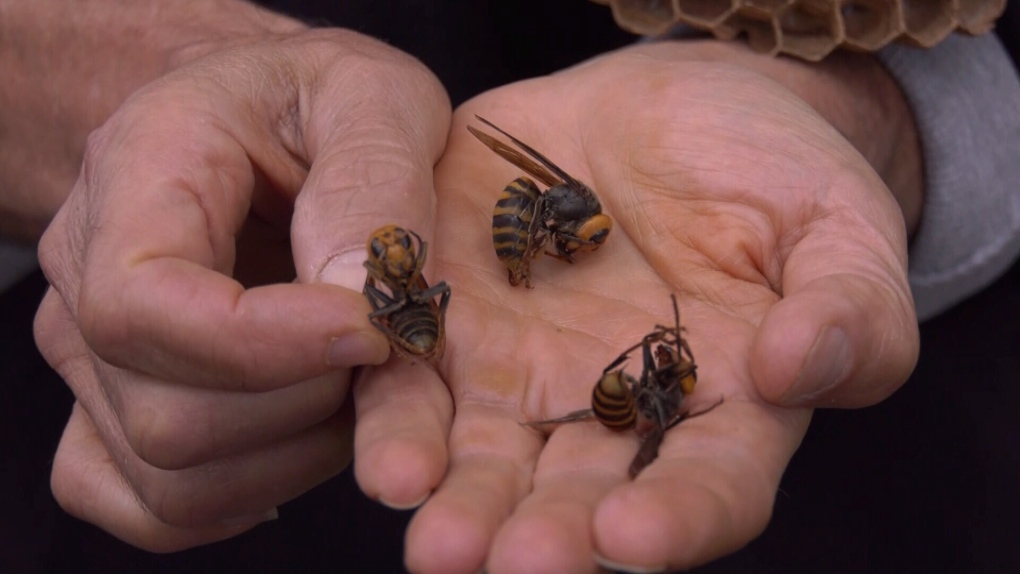 VICTORIA -- While there have been no confirmed sightings of Asian giant hornets, or "murder hornets," in B.C. since May, the provincial government says it has placed traps and is monitoring priority areas this summer.

The last verified sighting in B.C. dates back to May 13 in Langley, according to the province.

While the insects have not been seen for quite some time, the Ministry of Agriculture says traps and surveillance projects have been placed across the province.

Large-scale surveillance is ongoing in the western portion of the Fraser Valley, from White Rock to Langley, after a giant hornet was found north of Seattle near the Canada-U.S. border in July.

Other surveillance projects include two taking place on Vancouver Island in Nanaimo and the Cowichan Valley.

In Nanaimo, a group of beekeepers are keeping a close eye on the situation, after several local beekeepers in the area helped discover and eradicate one of the first Asian giant hornet nests found in B.C. back in 2019.

Meanwhile, monitoring began in the Cowichan Valley several weeks ago after the ministry received four “credible but non-verified” hornet sightings in the area.

Due to limited resources, the province says that it is unable to respond to hornet sightings if there are no photographs or physical evidence of the insect.

The Ministry of Agriculture asks that residents take pictures or trap a hornet when reporting a sighting to the province.

If you discover an Asian giant hornet in your home, the province recommends letting it leave through a window.

If you are feeling particularly brave, you can place a drinking glass over the hornet and slide a piece of paper underneath the cup to trap it. You can then put the cup into a fridge or freeze and wait approximately 30 minutes for the insect to stop moving. Pictures of the hornet can then be taken safely and submitted to the province.

Asian giant hornets are approximately 3.5 centimetres long and build nests in the ground, unlike other bees or wasps which build hives in trees or on buildings.

The insects get their "murder hornet" moniker because they often feed on honeybees, which can devastate local hives and populations.

If you are stung by an Asian giant hornet, treat it as you would a regular bee sting. You can place an ice pack or cloth on the sting to help reduce inflammation. Avoid rubbing the sting. If you are stung multiple times, or have an allergic reaction, the province recommends seeking medical attention immediately.