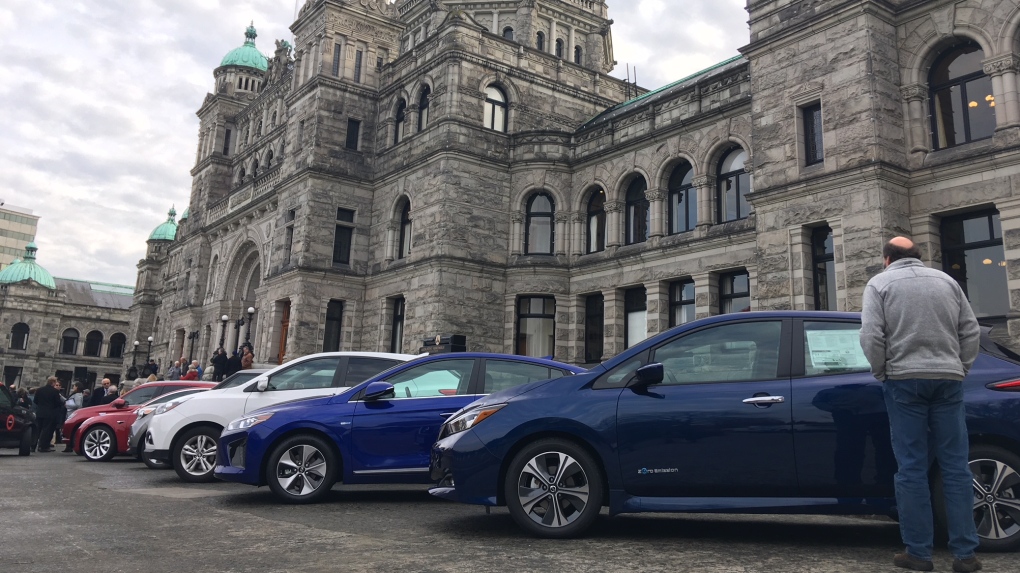 Electric vehicles were lined up at the B.C. legislature as the province on Nov. 20, 2018. (CTV Vancouver Island)

VICTORIA -- British Columbia remains a leader in electric-vehicle sales in North America, with an estimated 54,000 light-duty EVs now registered in the province, according to a new government report.

The province says EV sales remained steady through 2020, despite the economic slowdown of the COVID-19 pandemic.

"With the highest reported uptake rates of EVs in North America, B.C. is quickly becoming a leader in the EV industry," said B.C. Energy Minister Bruce Ralston in a statement Tuesday.

"British Columbians are committed to meeting our CleanBC goals and our transition to a clean energy future," Ralston added.

The report also indicates British Columbians are adopting EV technology for non-traditional vehicles like motorcycles and cargo e-bikes, according to the province.

Approximately 550 rebates have been claimed for non-traditional electric vehicles in B.C. since the province launched its Specialty-Use Vehicle Incentive (SUVI) program in 2017.

"People in communities across British Columbia are increasingly choosing electric vehicles to reduce air pollution, and for a better driving experience and lower operating costs," said George Heyman, Minister of Environment and Climate Change Strategy, in the statement.

"This transition is happening because EVs and charging stations are becoming more affordable and available through CleanBC," Heyman added. "By investing in cleaner, more affordable transportation options of all kinds, we're reducing climate pollution and supporting new opportunities for people in a stronger economy."

The province’s 2020 report on zero-emission vehicle registration highlights an increase of approximately 20,000 more EVs on B.C. roads than in 2019.