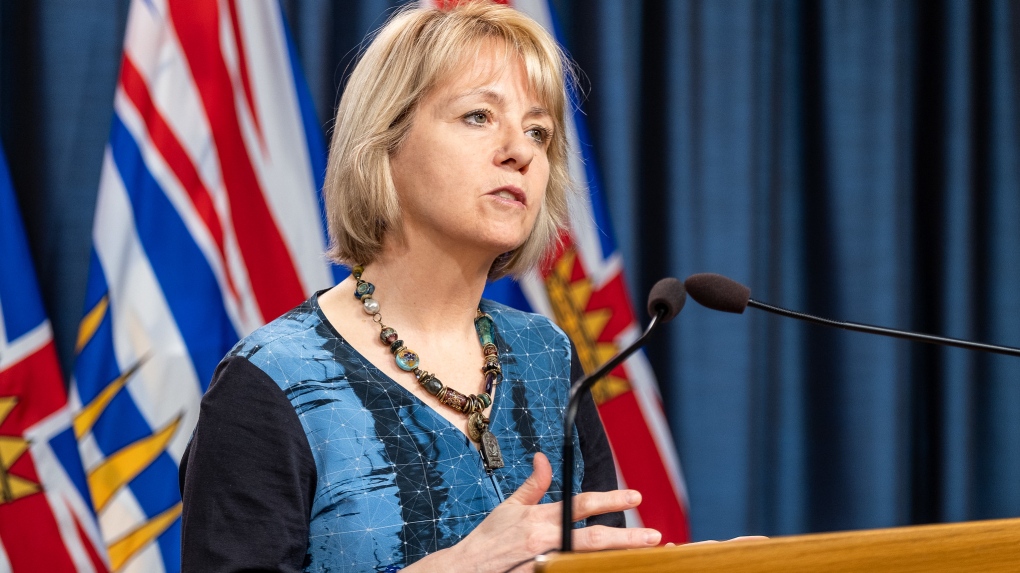 VICTORIA -- Two more people are dead and 148 others have been infected in the past 24 hours as the COVID-19 pandemic continues in British Columbia.

The newly detected cases bring the province's total to 8,543 cases of the coronavirus since the pandemic began early this year.

Henry also confirmed that an Indigenous elder in northern B.C. died of the virus over the weekend.

"I've had the opportunity since then to reach out indirectly to the family," Henry said. "I just want to express our deep, deep condolences – understanding how important the elders are in our communities."

There are now 1,371 active cases of the coronavirus in the province, marking the third straight day of declines in active cases from a high of 1,987 on Monday.

As of Thursday, 61 people are in hospital with the virus in B.C., including 20 patients in critical or intensive care.

One new outbreak of the virus was reported in a health-care facility in Vancouver Thursday, while another outbreak in the Fraser Health region was declared over.

There were no new community outbreaks reported Thursday, though Henry urged that community transmission continues to occur across the province.

There have also been approximately 30 exposure events reported in B.C. schools, but Henry stressed that contact tracers and public health workers are assessing risks and alerting those exposed to the virus on a case-by-case basis.

"If they have not been contacted, their families have not had a risky exposure in a school community," Henry said in a news conference. "We have over 2,000 schools across the province and with millions of children going back into the schools in the last few weeks, this is to be expected."

There have been no school exposures on Vancouver Island, Henry said, noting most of the exposures have been in the Fraser Health area, where most coronavirus cases are clustered.

Henry warned, however, that despite Vancouver Island's comparably low COVID-19 transmission rates, island residents are at the same risk of contracting the virus as other British Columbians.

"We feel a little a little insular in our island here, but it is a large island and I think I need to remind people that this virus travels with us," Henry said. "We've managed outbreaks on this island very well and we have great systems for detecting. We've had some challenges with our testing protocols – at least, Island Health has – but we're working through those as well."

Regardless, Henry cautioned islanders, "this is not a time to be complacent."

A total of 3,417 people are currently being monitored by public health officials due to exposure to known cases of the coronavirus, according to Henry.

The vast majority of B.C.'s COVID-19 cases have been located in the Lower Mainland, with 4,361 in the Fraser Health region and 3,094 in Vancouver Coastal Health.

Elsewhere in B.C., there have been 520 cases recorded in Interior Health, 278 in Northern Health and 203 in Island Health.

There have also been 87 cases among people who reside outside Canada.

Henry advised that Thanksgiving gatherings should be limited to household members only, rather than including extended family members, particularly seniors or those who are immunocompromised.

"Thanksgiving is an important time for us to remember and give thanks for those who we are closest to," Henry said. "There's no reason at all why you cant have Thanksgiving with your close household bubble."

A total of 6,917 in B.C. who contracted the virus are now considered fully recovered, according to Henry.