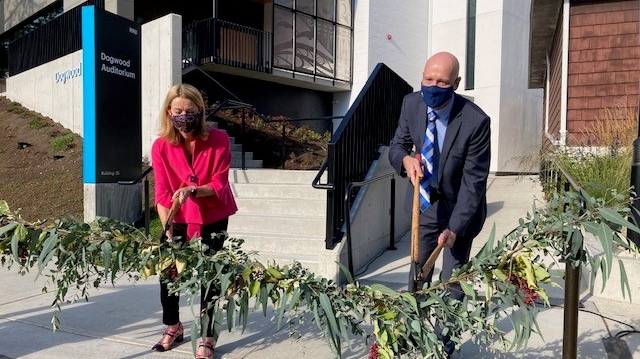 The multi-purpose building, dubbed the Dogwood Auditorium, will be open for public event bookings beginning January 2022, the province announced Friday.

The building includes a large presentation space with retractable seating and a partition that can divide the room in two, a media services room, a meeting room, and a multi-purpose room.

The province adds that the newly renovated building includes a "geo-exchange energy system," which is more energy efficient than traditional heating sources.

The Dogwood is described as the "largest conference space on the Westshore," according to the provincial government, and may also host convocation ceremonies for the university in the future.

"This building is a fantastic example of our government working with post-secondary institutions to invest in infrastructure that supports students and communities," said B.C. Minister of Advanced Education, Anne Kang.

"Renovating this historic space for a modern purpose creates a place for students to learn and for RRU to engage with the community, lean into partnerships and welcome everyone to their beautiful campus," she said.

The Dogwood Auditorium is located inside the university's former squash courts and locker rooms building. The building itself was originally constructed in 1959 and served as a pool for the former Royal Roads Military College.

Construction of the Dogwood Auditorium cost roughly $15.2 million, with the province providing $14.6 million in funding and the university contributing $600,000.

"I’m delighted that the partnership between our government and RRU is bringing us the first conference centre of this capacity in Westshore," said Mitzi Dean, MLA for Esquimalt-Metchosin in a statement Friday.

"I am excited that we are getting a place to gather, learn and build our community," she said.