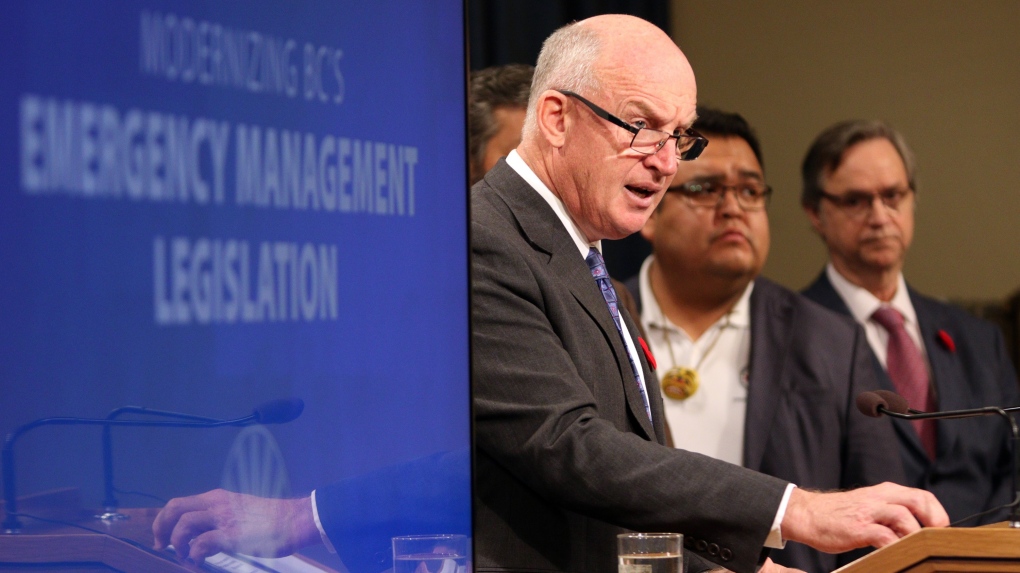 Minister of Public Safety and Solicitor General Mike Farnworth talks about seeking input on modernizing the Emergency Program Act calling upon emergency management practitioners, First Nations leaders, business and others during a press conference at Legislature in Victoria, B.C., on Monday, October 28, 2019. (The Canadian Press/Chad Hipolito)

VICTORIA -- A special committee of the B.C. legislature was appointed Wednesday to examine the scope of systemic racism in policing as part of the province's plans to modernize the Police Act.

Solicitor General Mike Farnworth said the all-party committee has until May 14 to complete its report and present findings and recommendations to the legislature.

“We know that the 45-year-old act is out of date and does not reflect today's challenges or the opportunities for delivering police services that work for everyone,” he said at a news conference.

“We know that the review will take time but it is long overdue and we want to make sure we get it right.”

He said the committee will examine the extent of racism in B.C.'s police agencies, including the RCMP, and review the impact on public safety and trust in policing.

“We're starting from the position, as we know, our institutions in this province have systemic racism built into them, often in the form of bias and often unintentionally,” said Farnworth.

“It's looking at the issue of systemic racism as it relates to our institutions and how they've been designed, and it will look at changes in terms of the Police Act.”

The committee will also review the role of police with respect to complex social issues that include mental health, wellness, addictions and harm reduction, he said.

It will also review and make recommendations on issues regarding independent oversight of policing, governance, education and police training, said Farnworth.

The committee's recommendations must ensure changes to the Police Act are consistent with the United Nations Declaration on the Rights of Indigenous Peoples, he said.

“It's timely to have a review of our Police Act because our police forces are asked to do a variety of tasks, including mental health work, which they are not entirely trained for,” he said.

Farnworth said last month every citizen deserves to be treated fairly by the police.

This report by The Canadian Press was first published on July 8, 2020.