Seventeen months after a mysterious stone carving was discovered at low tide on a Victoria beach, researchers at the Royal B.C. Museum and Archives are no closer to solving the question of its origin.

Emails obtained by CTV News show the museum initially rushed to declare the stone a historic Indigenous artifact even as credible questions about the carving's authenticity were raised.

The partially redacted documents, obtained under British Columbia's access-to-information law, show the museum was warned in the days after the discovery that the large stone pillar might actually be a modern creation and not an Indigenous artifact.

But the warnings went unheeded for months as the museum pushed ahead with plans to display the stone as a relic of ancient Indigenous culture on southern Vancouver Island.

One of the first warnings came just three days after the 100-kilogram sandstone carving was recovered – and more than six months before the museum made its discovery public.

In an email sent to museum curators on July 20, 2020, someone sent a link to a news report about a Victoria artist who makes stone carvings on the beach where the just-recovered artifact was found. The email writer's identity is redacted in the documents provided to CTV News.

Rather than contact the artist, the museum pressed ahead with its ancient-origin theory of the stone for the next six months. On Jan. 27, 2021, the museum made its determination official and publicly declared the carving a "very special ritual stone pillar" of the Lekwungen people.

But the finding confounded local carver Ray Boudreau, who spoke with CTV News two days after the announcement. Boudreau, who does not identify as Indigenous, maintains to this day that he made the carving in 2017.

The artist provided CTV News with iPhone photos of his carving, which vanished from the beach before he could finish it. The photos are dated Jan. 23, 2017, and show a stylized stone face that bears a striking resemblance to the one now housed in the museum. 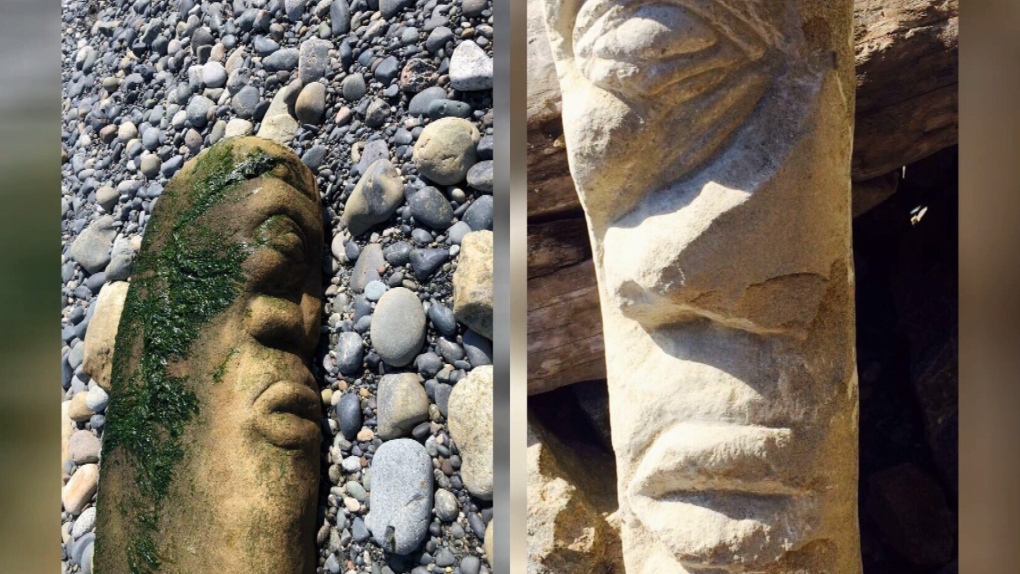 A comparison of the artifact (left) discovered in the water off Victoria, and Ray Boudreau's unfinished carving. (THE CANADIAN PRESS/HO - Royal BC Museum, Grant Keddie; Ray Boudreau)

To date, the museum has made no attempt to contact Boudreau.

"It's so clear to me that it's mine – it's beyond a reasonable doubt," the carver says. "It's clear to me and it should be clear to the layman too. So why are they just sitting on this thing in the basement?"

Within minutes of the carver's claim to the stone being published, the Royal B.C. Museum quietly removed all mention of the carving from its website. But the discovery had already been widely reported by local and national media, stoking excitement throughout the archaeological community.

The museum also deleted from its website a press release and an article about the carving written by Grant Keddie, the curator who led the discovery.

Keddie, then curator of the museum's Indigenous collections and repatriation department, had written at length about the stone's ritual significance to the Indigenous peoples of southern Vancouver Island.

But in the months after Boudreau, the local carver, challenged the museum's claim to the stone's origin, all of Keddie's research was erased from the museum website, along with his staff profile and contact information.

The curator was also removed from the B.C. government's staff directory, which lists contact information for current provincial employees.

Voicemail messages left on Keddie's museum phone have not been returned and his museum email address has been deactivated. Keddie did not respond to multiple interview requests for this story sent to his personal accounts. 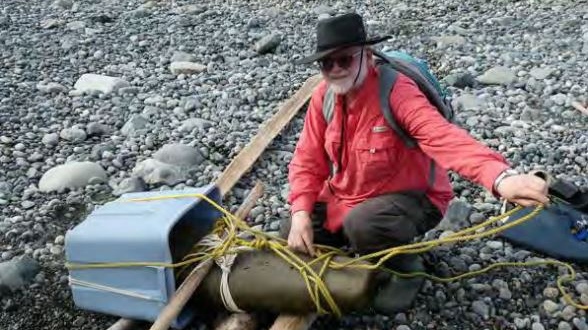 Museum officials declined to say whether Keddie resigned or was terminated from his role in the wake of the confusion around the carving. The museum has refused to make anyone available for comment on this story in the 11 months since the carving's provenance was cast in doubt.

Keddie's departure would be just the latest in a series of high-profile exits among museum staff over the past year and a half. Those exits include the ouster of president and CEO Jack Lohman amid a third-party investigation into workplace racism and mismanagement, and the voluntary departures of two Indigenous collections curators.

On the day the stone was recovered by Keddie, the curator wrote an email to the man who first stumbled across it, saying he believed it to be a "ritual stone" that "was used to change the weather" during pre-colonial Indigenous ceremonies.

"It may have been near the cliff edge 200 years ago or more and went down in a large earth slide that pushed it out as far as you found it," Keddie wrote. 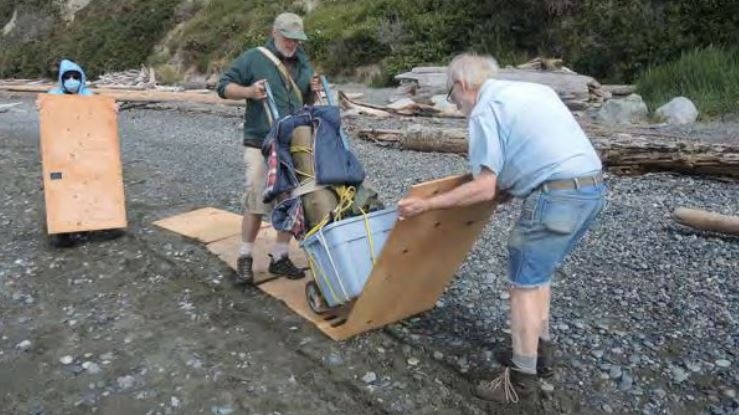 The stone carving is removed from the Victoria beach in July 2020. (RBCM)

The curator set about writing an in-depth article about the stone for the museum's website. Meanwhile, museum conservators worked to carefully desalinate the stone with fresh water and remove the seaweed that still clung to one side.

Within weeks, Keddie’s article and photos of the carving were ready for publication, and plans were underway to build a permanent installation for the "Lekwungen ritual stone pillar," according to the emails obtained by CTV News.

The installation would feature the carving set upright within a display case to "show the figure as it would have been seen centuries ago, partly in the ground," Keddie wrote.

But while plans for the big reveal were underway, there were concerns that the Lekwungen people – now known as the Songhees and Esquimalt First Nations – had not been engaged in the recovery and restoration process. 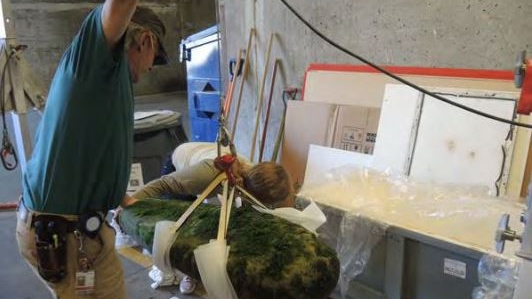 The sandstone carving was lowered into fresh water to remove salt and seaweed at the museum. (RBCM)

On Aug. 21, 2020, one month after the stone was recovered, a museum conservator wrote an email to Keddie asking for "more details about when you hope to show it to the Songhees."

No response was included in the records provided to CTV News. But three weeks later, as planning for the stone's unveiling continued, Keddie wrote to the museum's corporate communications manager to express his desire to publish his findings as quickly as possible.

"If media attention happens we will tell them that the conservation work needs to be completed and a formal event with Lekwungen involvement is be contemplated for the future," Keddie wrote.

The communications manager, who has also since left the museum, urged caution.

"My concern about publishing the blog post now – it is a public, easily-searchable site! – is that folks will ask whether the two Nations have been consulted," the manager wrote. "If you’ve already updated the text on the blog entry to reflect how much you’ve worked with the Nations throughout the process: terrific! If not, I recommend doing so."

The article was not updated to include mention of Indigenous collaboration when it was finally published along with the press release announcing the discovery on Jan. 27. 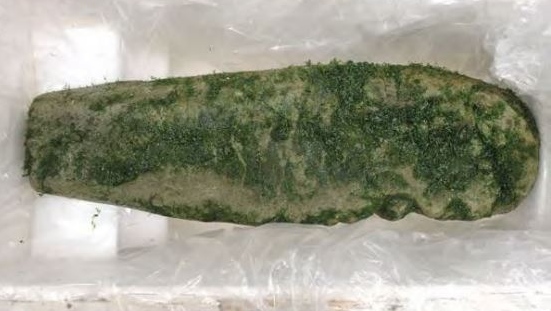 The sandstone carving was lowered into a vat of fresh water to remove salt and seaweed. (RBCM)

'GUT-WRENCHING TO READ ABOUT STONE'S REMOVAL'

Two days later, when the local carver came forward to CTV News with his claim to the carving, the museum removed the article and the news release from its website.

The ensuing confusion around the discovery prompted someone – whose name is redacted in the documents – to email Lohman, the museum's chief executive, with concerns about the removal of the stone from the beach.

"I am writing to express concerns regarding the handling of the carved stone pillar on Dallas [Road]," said the email, parts of which were also redacted due to potential harm to intergovernmental relations.

"I gather that it may, in fact, not be an old artifact. Nevertheless, my concerns remain because it may have been," the email's author said. "It was gut-wrenching to read about and see the pictures of its removal from the beach, apparently before local First Nations were involved. I would hope that it cannot be acceptable practice for the museum to unilaterally remove potential Indigenous artifacts, and then contact First Nations." 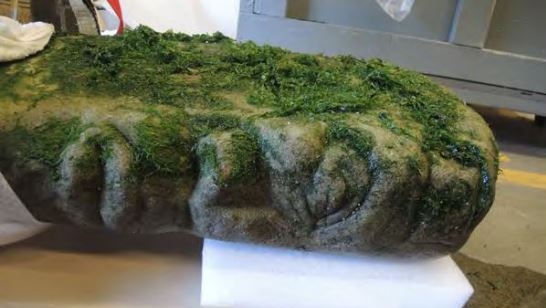 'DO NOT REACH OUT TO THE CARVER'

The confusion also prompted inquiries about whether the museum would contact the artist who claimed the carving as his own. The museum told CTV News in January that Keddie would be in touch with Boudreau to try to corroborate his story and compare his photos with the stone in the museum's collection.

However, email records show Lohman, the museum CEO, had already instructed Keddie and others not to get in touch with the artist, writing in a one-line email on Jan. 29: "Stone Pillar: Grant, please do not reach out to the carver."

That directive was among the very last communications about the carving sent between museum staff from the time the stone was discovered until May 21, 2021, when CTV News formally requested the records under the Freedom of Information and Protection of Privacy Act. 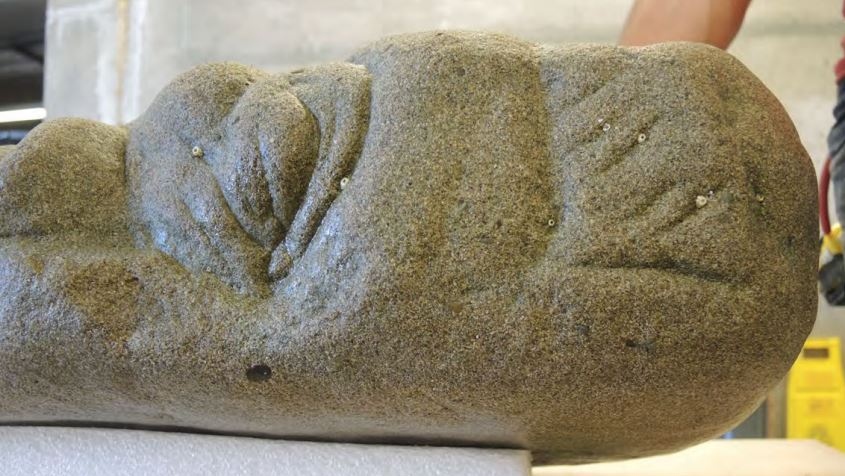 An image of the cleaned stone at the Royal B.C. Museum. (RBCM)

Chiefs from both the Esquimalt and Songhees nations say their members are still hoping to meet with museum curators to reach a determination on the carving. The matter will likely resurface in the coming months as the two sides hold discussions on the repatriation of the museum's Indigenous artifacts.

Ry Moran, a founding director of Canada's National Centre for Truth and Reconciliation, says the confusion around the artifact and the "significant upheaval" among museum leadership over racism in the workplace should serve as a catalyst to greater Indigenous involvement in the museum's collections process.

Whatever determination the museum eventually makes on the stone's origin, Boudreau, the local carver who has claimed it, says he hopes his artwork hasn’t widened a rift between the museum and the local Indigenous communities.

"It just makes me wonder why are they stalling and what's going to happen?" Boudreau says. "I might even approach the First Nations about making something for them as kind if a goodwill gesture. That way we can let it go – it's in the past."