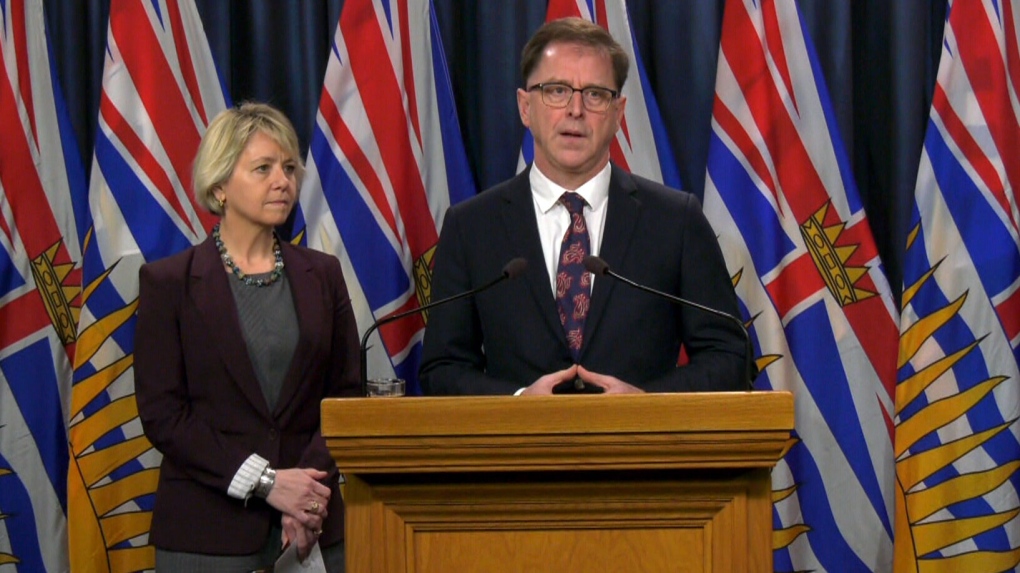 The province is working on having staff assigned to a single long-term facility to stop the spread of COVID-19 affecting the elderly as workers later found to be positive spread the disease from place to place. (CTV News)

VICTORIA -- Nearly 3,900 empty beds are available in hospitals around British Columbia in preparation for a possible influx of patients sickened with COVID-19, the health minister says.

Adrian Dix said Tuesday the cancellation of thousands of elective surgeries was necessary to ready the health-care system for “a much more difficult situation” given that 617 people in B.C. have now been diagnosed with the virus.

He said the number of cancellations will put a strain on home-care and assisted-living services for people needing operations.

Provincial health officer Dr. Bonnie Henry said 145 people have been diagnosed with the virus in the last two days, with 59 people in hospital, 23 of them in intensive care.

More and more people are being infected but greater adherence to measures such as social distancing will make a “huge” difference in the number of cases in next 10 days or so, Henry said, adding the virus can spread from people with very minimal symptoms.

“The way we break the chains of transmission is making sure that we're not close enough that this virus can spread between people. We're doing everything we can and we need you to do the same as well.”

She said that while some people are asking whether 13 deaths in B.C. could mean the province is on the same serious trajectory as northern Italy, it's important to remember that 10 of the deaths occurred in one long-term care facility in North Vancouver.

That's considered a single event in the community and reinforces that more awareness is needed about the fact that seniors are a vulnerable population, Henry said.

Later this week, Henry will present information about B.C.'s outbreak of COVID-19 cases compared with those elsewhere in the country and around the world.

The province is working on having staff assigned to a single long-term facility to stop the spread of COVID-19 affecting the elderly as workers later found to be positive spread the disease from place to place, Henry said.

One piece of good news in B.C. is that 173 people have fully recovered from COVID-19, amounting to 28 per cent of the total cases, Henry said, adding young, healthy people with a mild form of the illness can recover at home.

“We're learning from around the world that once you've recovered from this you have immunity for a period of time, at least for the next few weeks to months, which is really helpful, I think, in encouraging people and supporting people to be able to, if you are a health-care worker, to safely work with cases of COVID-19.”

Henry said 32 people who attended an international dental conference in Vancouver earlier this month have been infected with the virus and public health officials have contacted everyone who was there to self-isolate.

A dentist who was at the event has died but his cause of death is not known and the BC Coroners Service is investigating, she said.

“Anybody who was at risk from exposure to this individual was identified. It is tragic that he passed away.”

She said the dental college has notified all dentists to stop providing services except for emergency needs given the pandemic.

Henry has also notified all the regulatory colleges for health-care professionals including dentists, chiropractors, doctors, nurses and massage therapists to also reduce their practices to the same level.

This report by The Canadian Press was first published March 24, 2020.