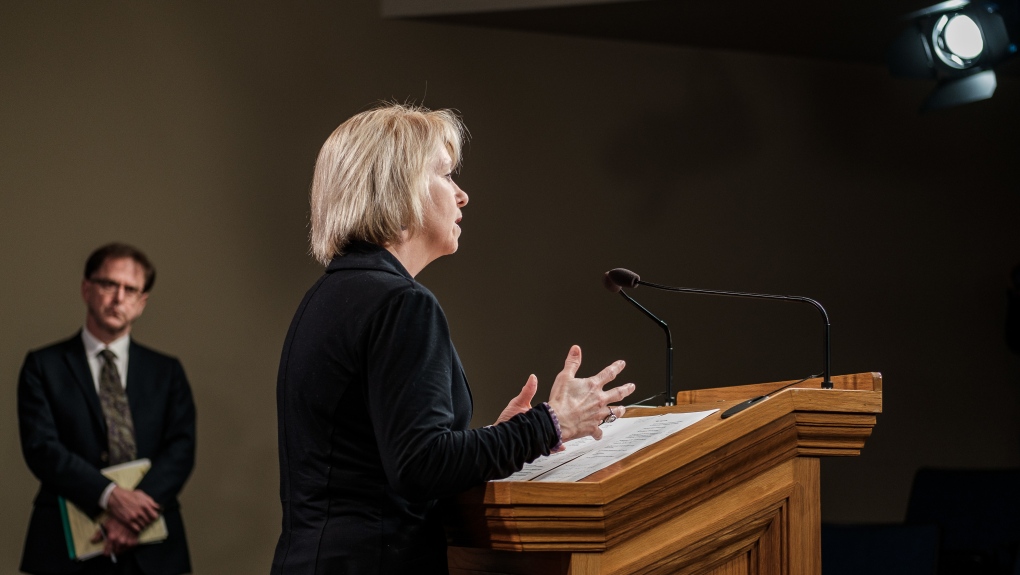 VICTORIA -- Four more people have died from COVID-19 in British Columbia, health officials announced Thursday, bringing the death toll from the coronavirus in the province to 94.

They also announced 29 new test-positive cases of the virus and several new outbreaks, including one at a long-term care facility in the Interior, two in acute care units at Lower Mainland hospitals, and another one at a poultry processing facility in Coquitlam.

Provincial health officer Dr. Bonnie Henry and Health Minister Adrian Dix announced the new cases and outbreaks at their daily briefing on the virus Thursday. The update comes after the pair announced 71 new cases of the virus on Wednesday - the largest single-day surge since March.

The number of new cases announced Thursday is more in line with where it had been on Monday and Tuesday, when the province announced fewer than 30 new cases confirmed through testing over the preceding 24-hour periods.

A total of 1,824 people have tested positive for COVID-19 in B.C. Of those, 103 are in hospital and 44 are in intensive care, according to health officials.

The lower number of new cases B.C. has been announcing in recent days, as well as the stable number of hospitalizations from the virus, have prompted discussions about how and when the province will ease the restrictions put in place to limit the spread of COVID-19.

On Thursday, both Henry and Dix warned that the easing of restrictions will be gradual and will require continued diligence from British Columbians.

Henry encouraged British Columbians to think about what their own personal lives and connections could look like in an intermediate phase, using the example of returning to work outside the home while continuing to avoid contact with friends and loved ones who are at greater risk of severe illness should they contract the virus.

"We are going to be living with COVID-19 in our communities for some time," Henry said. "We need to be very careful, and we need to be thoughtful about it and we need to consider what we are doing and how it's going to impact our family carefully. A misstep in the wrong direction puts us all at risk, because we have seen how quickly this virus can take hold."

The provincial health officer reiterated that the reason B.C. is able to have this conversation about loosening restrictions is because of the work residents of the province have already done to limit the spread of the virus. That work will be over some day, Henry said, but she stressed that it needs to continue now.

"This is not forever," she said. "It is for now. And 'now' may be months. It may be as long as a year, but there is a light at the end of that tunnel. And we have shown that we can do this. We have shown that in the last few months."

The new outbreaks announced Thursday include one at Orchard Manor at Hawthorn Park, a long-term care facility in Kelowna. It's the second such outbreak at a home outside the Lower Mainland. Henry said a single case has been identified at the facility.

Henry said those outbreaks are contained to single units within those hospitals.

The poultry processing facility outbreak occurred at Superior Poultry in Coquitlam, which Henry described as a "sister" plant to the United Poultry facility in Vancouver where an outbreak was announced earlier this week.

Two people have tested positive for COVID-19 at Superior Poultry, and the total number of positive tests at United Poultry has risen to 29, Henry said.

She said officials expect to find additional cases associated with the Superior Poultry outbreak, saying they believe the virus was introduced to the second facility through its connection to the first.

"There were some people working at both places or at least some movement of people between both places," Henry said.

The provincial health officer also highlighted an additional case confirmed at the Mission Institution medium security federal prison, bringing the total there to 78 cases. She called that outbreak "very challenging" and said she expects it to be ongoing "for some time."

In more positive news, Henry said a total of 10 long-term care facility outbreaks that had previously been announced are now considered over.

Some 1,092 people who have previously tested positive for the coronavirus are now considered fully recovered, meaning there are 638 active cases of the virus in British Columbia.

First phase of re-opening Sask. economy to begin on May 4

Trump approved of Georgia's plan to reopen before bashing it

Don't spend it all: CERB recipients will owe income tax on it next year