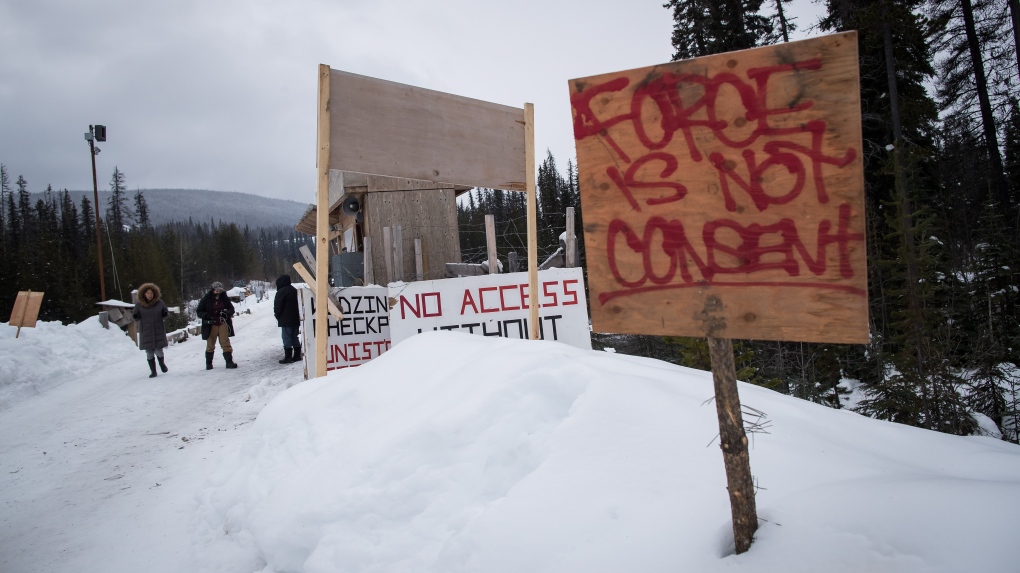 The British Columbia Supreme Court has granted Coastal GasLink an interlocutory injunction against members of a First Nation and others who oppose the company's natural gas pipeline. A checkpoint is seen at a bridge leading to the Unist'ot'en camp on a remote logging road near Houston, B.C., Thursday, Jan. 17, 2019. THE CANADIAN PRESS/Darryl Dyck

SMITHERS -- A hereditary chief with the Wet'suwet'en First Nation says the community is expecting further police action after the British Columbia Supreme Court ruled in favour of a natural gas company that wants to build a pipeline through its territory.

Na'moks, who also goes by John Ridsdale, said he wasn't surprised that the court granted Coastal GasLink an interim injunction against members of the First Nation and others who oppose the pipeline.

The Dec. 31 ruling came just under a year after the RCMP enforced an injunction granted by the same court that drew international attention with the arrest of 14 people on Jan. 7, 2019.

“We do expect the RCMP to bring it to another level. They did it last year, they'll do it again this year,” he said in a telephone interview.

The RCMP said in a statement that it respects the ruling and the judicial process, but it would not say if or when police would enforce the latest injunction.

“The RCMP respects the rights of individuals to peaceful, lawful and safe protest and we are committed to facilitating a dialogue between all parties. We are impartial in this dispute and it is our hope that this can be resolved peacefully,” Corp. Madonna Saunders said.

The $6.6-billion Coastal GasLink pipeline would transport natural gas across 670 kilometres from northeastern B.C. to the LNG Canada export terminal in Kitimat.

The company has said it signed agreements with all 20 elected First Nations councils along the path, however five hereditary chiefs of the Wet'suweten First Nation say the project has no authority without their consent.

Na'moks said the First Nation is also exploring options for court action, including an appeal of the decision and a constitutional challenge.

“We have a number of avenues open to us that we're looking at right now.”

Following police enforcement last year, the hereditary chiefs reached an agreement with RCMP that Na'moks said at the time was to ensure the safety of local members. Under the agreement, the company must give the First Nation 24-hour notice of workers entering the site, he said.

The agreement did not represent consent for the project and Na'moks said members remain firm in their opposition.

“Our stance hasn't changed,” he said Thursday. “Our people have said no to this, so we've said no.”

Over the past year, Coastal GasLink has begun what it calls “pre-construction” work at the site, drawing criticism from members of the First Nation who say that work threatens or destroys historic artifacts, trails and hunting grounds.

The company issued a statement following the court ruling saying its work is approved and permitted.

Coastal GasLink will continue trying “to engage with any affected groups to ensure public safety while (its) field crews continue to progress their critical activities,” it said.

Unist'ot'en spokeswoman Freda Huson, who is named in the injunction, said the court decision fails to recognize the authority of Wet'suwet'en law even though the First Nation has never ceded its territory.

According to the decision, Indigenous laws do not become an “effectual part” of Canadian common law or domestic law until there is a means or process to do so that is already recognized by Canadian law, such as through treaties, Aboriginal title declarations in the courts or statutory provisions.

That has not occurred in the Wet'suwet'en case, it said.

Wet'suwet'en title claims have not been resolved by either litigation or negotiation, the decision said.

The court also said some of the constitutional questions posed by the Wet'suwet'en go beyond the scope of the injunction application. It said those questions would have to be determined in a trial.

Huson has lived on the land in question for a decade and what started as a camp now has several permanent structures, including space that is used as a healing centre, which she said she will keep running.

“We'll continue to exercise Wet'suwet'en law, it's what has sustained us,” she said.

“We're not feeling defeated because we know what we're doing is right.”

This report by The Canadian Press was first published Jan. 3, 2020.