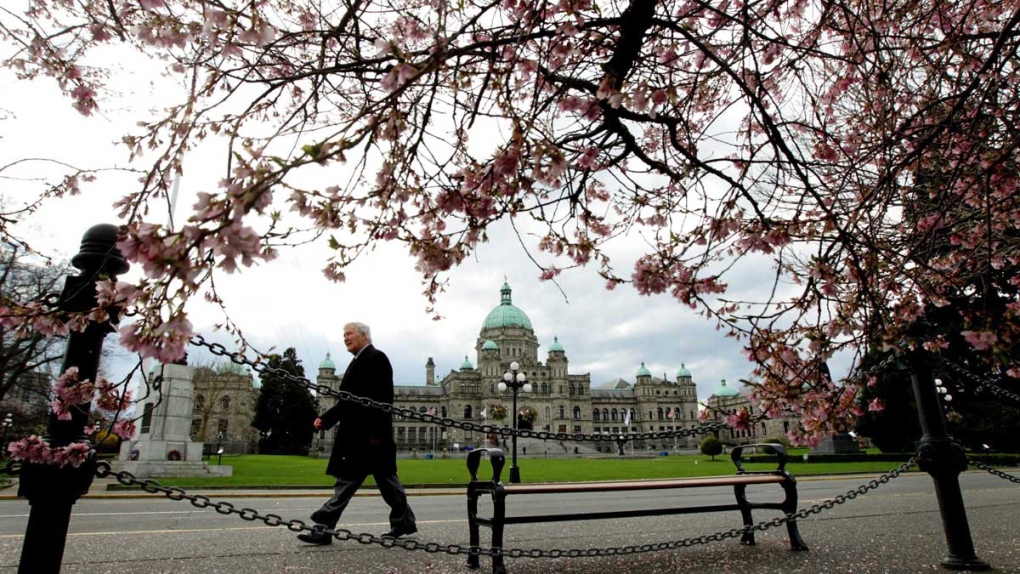 The British Columbia Legislature is framed by cherry blossoms as a pedestrian passes by in Victoria , B.C. (Darryl Dyck / THE CANADIAN PRESS)

The president of the British Columbia Association of Police Boards appeared before a special committee in the B.C. legislature Wednesday to advocate for charging the public up to $100 to file freedom-of-information requests to police departments.

BCAPB president Charla Huber told the all-party committee reviewing the province's freedom-of-information laws that answering FOI requests is a drain on police resources and "could be ultimately affecting public safety."

In her submissions, Huber singled out "serial FOI requesters" as especially burdensome on department resources, and suggested either limiting the number of FOI requests someone could submit in a year, or charging increasingly higher fees for repeated requests.

"Every single municipal police board has individuals that are putting in numerous FOI requests per month," Huber said. "Some departments have individuals putting in up to eight requests a month. Some of those requests could take two staff two weeks to address."

The B.C. government imposed a $10 fee for FOI requests in November and some B.C. municipalities have followed suit. However, Huber, who is also a member of the Victoria and Esquimalt Police Board, said police departments have thus far been reluctant to go down that road.

"Even a $10 fee for a serial FOI requester may not be enough to deter that or slow that down," she said, suggesting that "after eight or 10 requests in a year, maybe that fee increases to $50 or $100, and that will make people more selective in the information that they're seeking."

Stephen Harrison is likely one of the "serial FOI requesters" Huber has in mind. The Victoria man filed eight FOI requests in November, saying he had "a long-term list of ideas I thought I might get to one day."

Harrison has regularly attended Victoria police board meetings for the past four years. He says he submitted his backlog of eight FOI requests in November when he saw the province move to impose the $10 fee, opening the door to municipalities to do the same.

"I thought it best to file them before that happened," he told CTV News. "Given Huber's advocacy for fees of up to $100 per request, I feel I made the right decision."

B.C. Liberal MLA John Rustad, who is deputy chair of the committee, proposed "a different way of thinking about FOI" at the hearing Wednesday, one that would instead default to making more police records and information public.

Such proactive disclosure, Rustad said, could cut down on repeat requests for the same topic, especially when a request is dismissed or answered with incomplete information due to a department's narrow interpretation of the information being sought.

"I think that's one of the big challenges that we've seen with FOI," Rustad told the committee. "You come back. You don't get any records or you get incomplete information, so you end up putting in multiple requests to try to find this."

Huber said the Victoria Police Department has four full-time administrative staff dedicated to answering freedom-of-information requests, calling it a "high number of staff" that every B.C. police department struggles to budget for without some kind of additional reimbursement.

"It's a very small number of people taking up a significant amount of staff resourcing time and, specifically, not actually having a topic, just saying, 'I want this,'" Huber told the committee.

"I've heard from FOI staff that many of these individuals are not very kind to the staff. They're very demanding. They have a bullying nature when they're asking for these things," she added. "It's a big issue. I think, in police departments, particularly, there's a lot of morale issues right now with the public lens on policing. These types of incidents are not helping."

Harrison contends that filing FOI requests is one of the few ways the public can obtain detailed information about how police departments spend public money.

Sean Holman, professor of environmental and climate journalism at the University of Victoria, called the imposition of fees for freedom-of-information requests "a very regressive act," saying the freedom-of-information system already defaults to secrecy without the added burden of a financial penalty for those seeking public information.