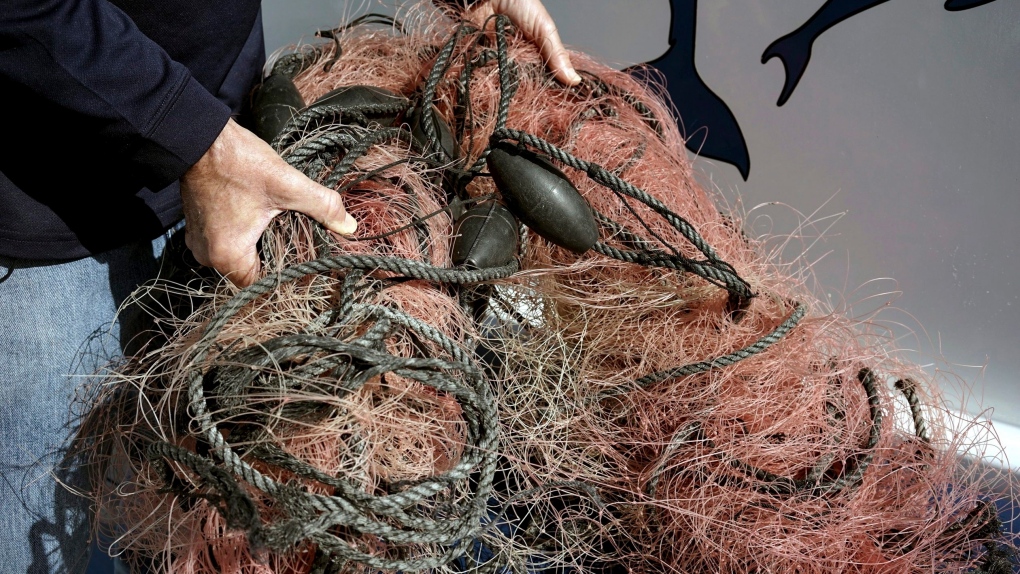 David Anderson, of Captain Dave's Dolphin and Whale Watching Safari, in Dana Point, Calif., shows a net that a whale was found entangled in Monday, Nov. 30, 2015. (THE CANADIAN PRESS/AP-Christine Armario)

VICTORIA -- The B.C. government is unveiling a new environmental cleanup fund, which is set to support the tourism industry and coastal First Nations communities during the COVID-19 pandemic.

On Monday, the province announced the Clean Coast, Clean Waters Initiative Fund, which includes a $3.5-million cleanup project based in the province’s central coast, including along the Great Bear Rainforest.

The cleanup will include two 21-day expeditions involving nine marine vessels and more than 100 crew members, as well as multiple First Nations vessels which are being funded as partners in the project.

The two expeditions will be directed by the Small Ship Tour Operators Association which is made up of tourism operators from across the province. The association says that the new cleanup project will help tourism businesses survive after industry lost much of its 2020 season due to COVID-19.

“When it became clear that we all would have to cancel a sold-out season, we asked ourselves how we could use our skills to protect the environment that sustains us,” said Kevin Smith, member of SSTOA and president of Maple Leaf Adventures, in a release Monday.

“It’s really rewarding to work with our colleagues, First Nations communities, the Wilderness Tourism Association and the Province of B.C. on projects that help the ocean we love and support our industry during this unprecedented time,” he said.

Weather permitting, the province estimates that cleanup efforts will stretch around 100 small islands and up to 1,000 kilometres of B.C.’s coast during the two expeditions. Approximately 75 to 100 tonnes of marine debris are expected to be collected during this time.

“B.C.’s coastal environment is one of our greatest assets, attracting visitors from all over the world and supporting tourism in British Columbia,” said B.C. Tourism Minister Lisa Beare in a statement.

“Funding for these projects not only protects the marine environment, but provides jobs for people affected by the significant decrease in tourism as a result of the pandemic,” she said.

According to the province, approximately one garbage truck of plastic waste is put into the world’s oceans every minute, for a total of eight million tonnes per year.

In 2019, nearly half of all ocean debris collected in Canada was removed in B.C., at nearly 78 tonnes.