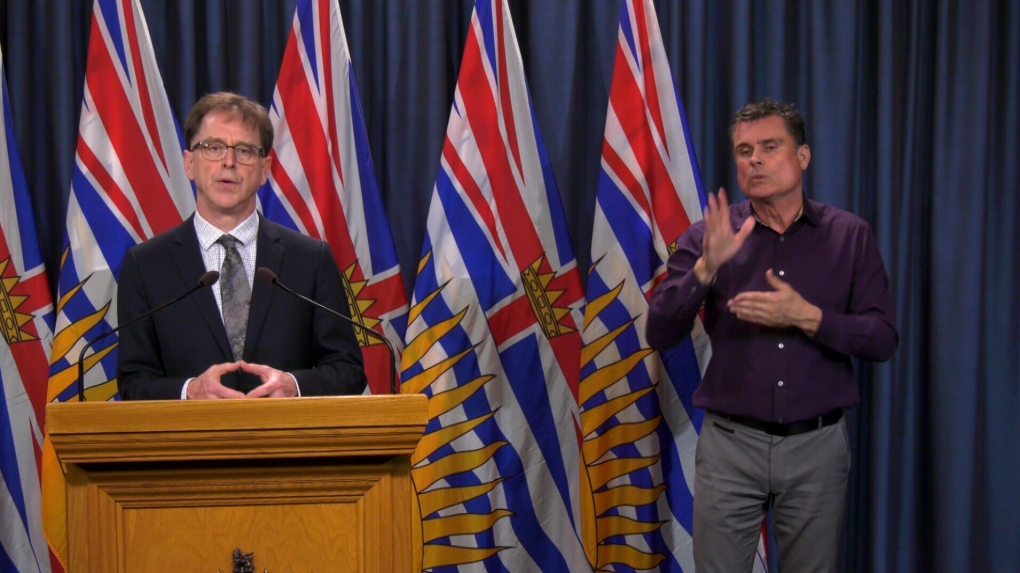 B.C. Health Minister Adrian Dix and an interpreter at the B.C. legislature on March 24, 2020. (CTV News)

Currently 59 people are in hospital with COVID 19, 23 of them in intensive care.

Provincial health officer Dr. Bonnie Henry announced no new deaths related to COVID-19 Tuesday, one of several positive signs she pointed to in her afternoon briefing.

"We now have 173 people who have fully recovered from COVID-19, so that's 28 per cent of our total cases and I think that's a really positive thing," Henry said Tuesday.

"It shows us that most people, particularly young healthy people who have a milder illness, are able to manage at home and are recovering at home."

Henry also said those who recover from the illness appear to become immune to it "at least for the next few weeks to months."

Thirteen people have died of the novel coronavirus in B.C.

Henry said Canada's self-isolation order for those who have travelled outside the country has proved effective at managing and tracking new cases of the virus in B.C.

"That allows us to focus on the community cases where we do not know the source of infection," Henry said, adding that the province has tested nearly 30,000 people for the virus.

"The majority of our cases are in the Lower Mainland but no community in this province is immune and we know this virus can spread with people having very minimal symptoms," Henry said.

"The way we break the chains of transmission are making sure that we're not close enough that this virus can spread between people," she added, stressing the importance of physical distancing measures.

B.C. Health Minister Adrian Dix said the still-escalating number of coronavirus cases in B.C. is indicative of the "seriousness of the struggle British Columbia is facing."

Dix said the province has made more hospital beds available to COVID-19 patients, bringing the provincial total to 3,866 available beds as of Tuesday.

1,013 confirmed cases of COVID-19 in Quebec as province prepares for midnight shutdown

What pet owners need to know about COVID-19

Trump says he wants the U.S. 'opened up and just raring to go by Easter'

Should I be worried about COVID-19 and clothing? Experts say it depends on your job

Volunteers are sewing homemade face masks, but are they effective?