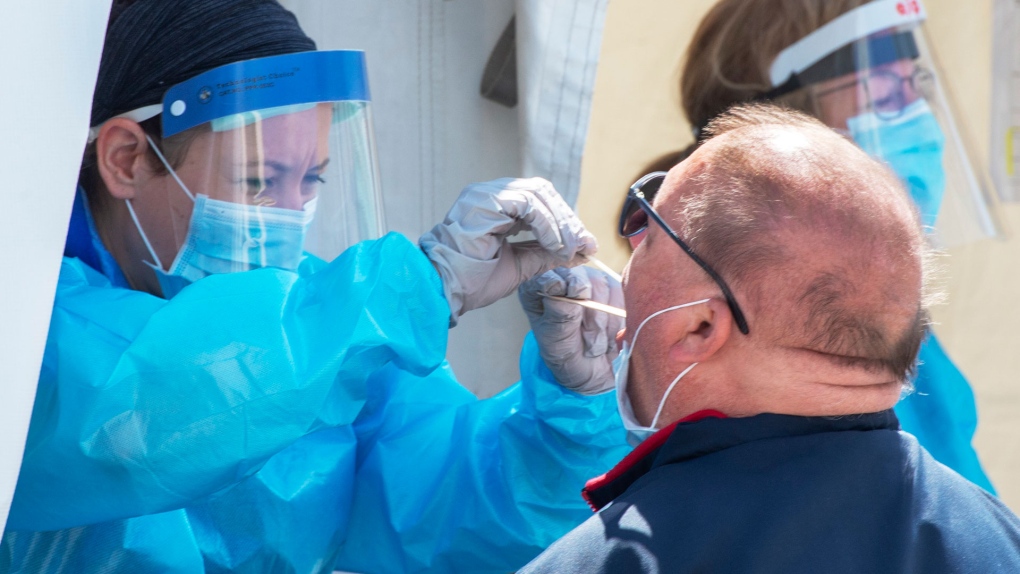 A man gets tested at a COVID-19 testing clinic Thursday May 14, 2020 in Montreal.THE CANADIAN PRESS/Ryan Remiorz

The new cases include one epidemiologically linked case, meaning that the case is presumed to have occurred, though no COVID-19 test was conducted.

Meanwhile, no new deaths related to the virus have been recorded in the province over the past 24 hours.

Since the pandemic began, B.C. has seen a total of 2,990 coronavirus cases and 183 deaths.

Over the same period, 2,645 people who tested positive for COVID-19 have now recovered, leaving 162 active cases in the province.

Of those cases, 16 people are in hospital for treatment, including four who are in critical care.

Health officials say that no new outbreaks have occurred in health-care facilities or in the community.

Meanwhile, an outbreak at Tabor Home in the Vancouver area has been declared over.

However, three outbreaks continue in health-care centres, including two at long-term and assisted-living facilities and one at an acute-care facility.

While all community outbreaks have been declared over, health officials warn that new cases are still appearing.

“While there are no active community outbreaks in B.C., new cases and community exposure events continue to occur in the community,” said B.C. Health Minister Adrian Dix and provincial health officer Dr. Bonnie Henry in a joint statement Tuesday.

Health officials cite a recent community exposure event at Hotel Belmont bar and nightclub in the Vancouver Coastal Health region that occurred in late June as a reason to remain vigilant.

Anyone who may have been at the establishment on June 27 and June 29 are asked to monitor for symptoms and to limit contact with other people.

“It is important to remember that the more people you see and the more places you go, the higher the likelihood is that you’ll come into contact with someone with COVID-19,” said Dix and Henry.

“To protect yourself, the best things you can do are to keep the number of people you see to a minimum and as much as possible, maintain a safe distance from others and use a mask when that is challenging.”

The majority of COVID-19 cases in B.C. have been located in the province’s Lower Mainland, with 1,576 discovered in the Fraser Health region and 1,013 recorded in the Vancouver Coastal Health region since the pandemic began.

On Tuesday afternoon, the B.C. government also announced that it would be extending its provincial state of emergency by another two weeks, until July 21.

The state of emergency is being extended based on recommendations by provincial health officials, according to the B.C. government.

The last time the declaration was extended was on June 24, the same day Premier John Horgan announced that B.C. would be entering Phase 3 of its restart plan.

“We’re starting to see some restrictions lifting, but there are measures we need to keep in place to continue battling COVID-19,” said Horgan in a release Tuesday.

“We will continue to take the necessary steps to make sure British Columbians are safe and that the most vulnerable people are protected, while experts work to find a treatment or vaccine,” he said.

B.C.’s current state of emergency was first declared on March 18 and has now entered its fifteenth week.

How Canadians and Americans are responding differently to wearing face masks

When a COVID-19 vaccine is ready, some Canadians likely won't want to get it

When it comes to going back to work, COVID-19 is impacting Canadian mothers more than fathers: study

Refusing a mask should be as taboo as drinking and driving, leading scientist says

Can I tuck it under my chin? Hang it from a rear-view mirror? Here's what to know about face masks

U.S. is still 'knee-deep' in the first wave of the coronavirus pandemic, Fauci says

Ontario set to extend some emergency orders until next year