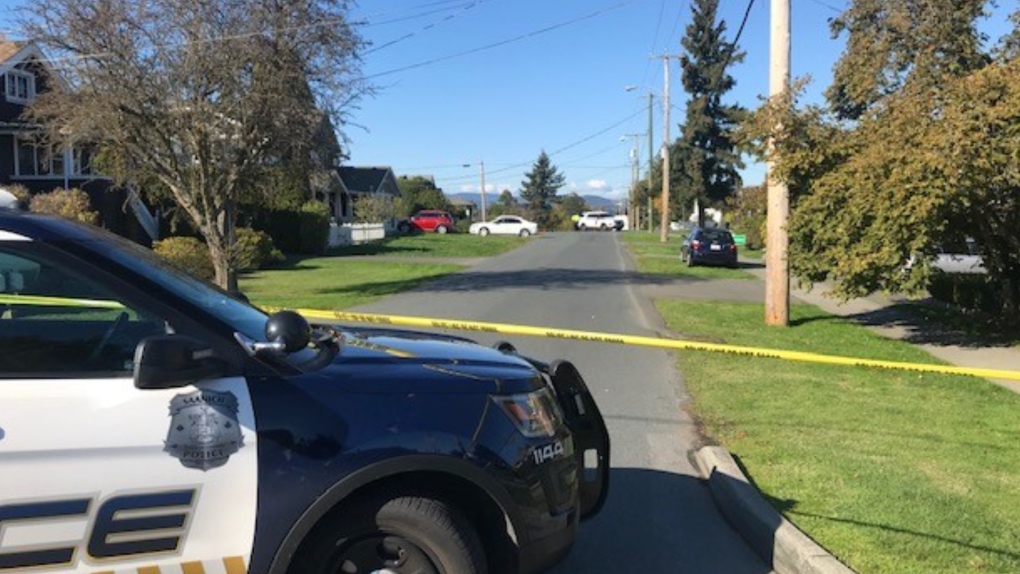 Police evacuated some homes in a Vancouver Island neighbourhood after the discovery of an "antique incendiary device" Saturday morning. (CTV)

VANCOUVER -- Andrew Winger spends a lot of his time appraising, purchasing and selling antiques, and he has a keen interest in military items, but one piece he acquired recently turned out to be a bit more than he bargained for.

Police evacuated some homes in Winger's Vancouver Island neighbourhood after he notified them of his discovery, which police described as an "antique incendiary device" Saturday morning.

Winger's business, Steptoe Services, specializes in downsizing and estate liquidation. He said the device turned up in a box of mechanical equipment and tools that he purchased from the estate of a former mechanic who specialized in British automobiles from the mid-20th century.

"In the box, I didn't know at the time, but I found out later on when I went through it, there was a - what looked very much like a bomb or a mortar," Winger told CTV News Vancouver Island. "I could tell it was military-related right away."

Sure enough, when he showed pictures to a friend who is an expert in these things, he soon learned it was an "incendiary cluster bomb" - not an explosive, but a weapon designed to start fires by burning at roughly 4,000 degrees Fahrenheit, Winger said.

This particular weapon was German in origin, and came from the Second World War era.

"They were dropped by the tens of thousands over British cities during the blitz," Winger said. "When dropped in large quantities, they did a lot of damage."

Winger's friend advised him to call police, because there was a good possibility that the device was still live.

Saanich police told CTV News they were called to the 100 block of Maddock Avenue, near its intersection with Earl Grey Street, around 11:30 a.m. Saturday.

Police stressed that the device is not an explosive, but said they evacuated a few nearby homes as a precaution. They also requested the assistance of Military Police in dealing with the situation, which they hoped to have resolved Saturday afternoon.

Winger said his purchases of military memorabilia usually entail things like medals and uniforms. This is the first time he's come across military ordnance, which is the term used for explosives and other weaponry, he said.

He described it as "an interesting thing to find," and said the process of disposing of it interested him as well.

"There was an order to evacuate within 100 metres in every direction and they cordoned off several blocks, which was all pretty interesting, and then they told me I had to evacuate as well, which was rather disappointing, although I guess probably in the best interests (of everyone)," Winger said.

He said his advice to anyone who finds something unusual or antique in their home is to call a professional to come take a look. That is, unless it looks like a bomb, in which case you should call police.

People living in the 100 block of Maddock Avenue have been evacuated by police.

Officers are responding to a call involving an antique incedinary device.