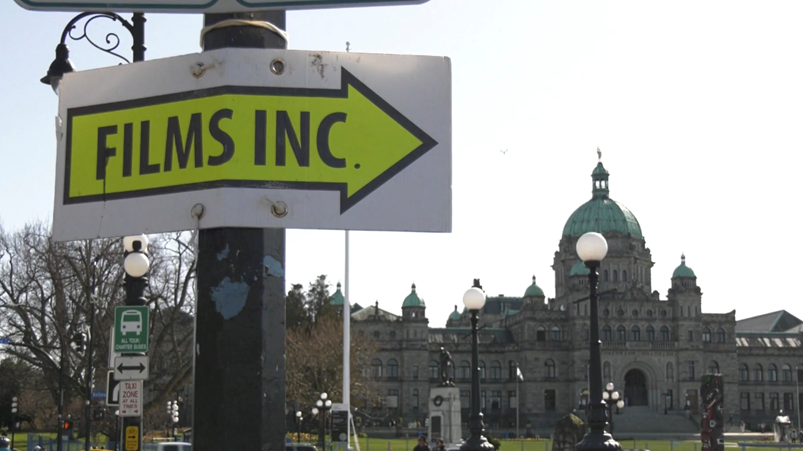 The South Island's film industry has thrived during the pandemic, despite health restrictions: (CTV News)

VICTORIA -- As many businesses in Greater Victoria have been hit hard by the pandemic, the local film industry has seen a surge in production.

According to the South Island Film and Media Commission, there have been nine productions shot this year, with two more set to roll cameras in the coming weeks.

"We have another show that is doing some of the shooting here and some in Vancouver and I believe that will be starting in a week," said Victoria Film and Media Commissioner Kathleen Gilbert. "We have one that’s not 100 per cent landed yet, but it should start filming in a month or so and film right until spring (2022)."

Gilbert says the commission still has some work to do to get the production crew to choose the Greater Victoria area. She goes on to say that even without a firm commitment from the producers of such a large show, 2021 has had a good start.

"It's been an amazing year, amazing," said Gilbert. "It's looking like 2021 is going to be another banner year, it certainly has been the busiest start to any year that we’ve had since I’ve been the film commissioner for the last 10 or 11 years."

Gilbert says the local film industry brings between $18 million and $30 million dollars to the regional economy in an average year. She says that despite the industry shutting down for a number of months starting in March 2020, film production added $55 million to the local economy in 2020.

“In terms of numbers of productions, this year will be good, but in terms of direct spend it might be a little lower because the production of Maid left a lot of money behind," said Gilbert. "We don’t know if we’ll reach that $55 million direct spend but there’s still quite a few months left in the year, so fingers crossed we can reach that."

Gilbert says with COVID-19 infection rates on Vancouver Island being low compared to other production locations, it makes filmmaking in the region very attractive during the pandemic. She goes on to say that one of the major reasons for the growth in the industry is the available locations.

"We have castles and lighthouses and historic downtown so when they see our locations fit their script it's great," said Gilbert. "Then they want to see how many trained crew members we have and that number is rising every year here in Victoria."

Gilbert says the commission has more than 800 experienced film professionals in its database. She says with that number of trained professionals in the region as many as three full productions can be crewed.

Gilbert says with tax incentives, trained film crews and a host of locations, she sees no reason why the industry can’t continue to grow on southern Vancouver Island.

"It's a success story," said Gilbert. "Even through COVID we managed to keep people employed right through the last year and a half with filming happening in the region."