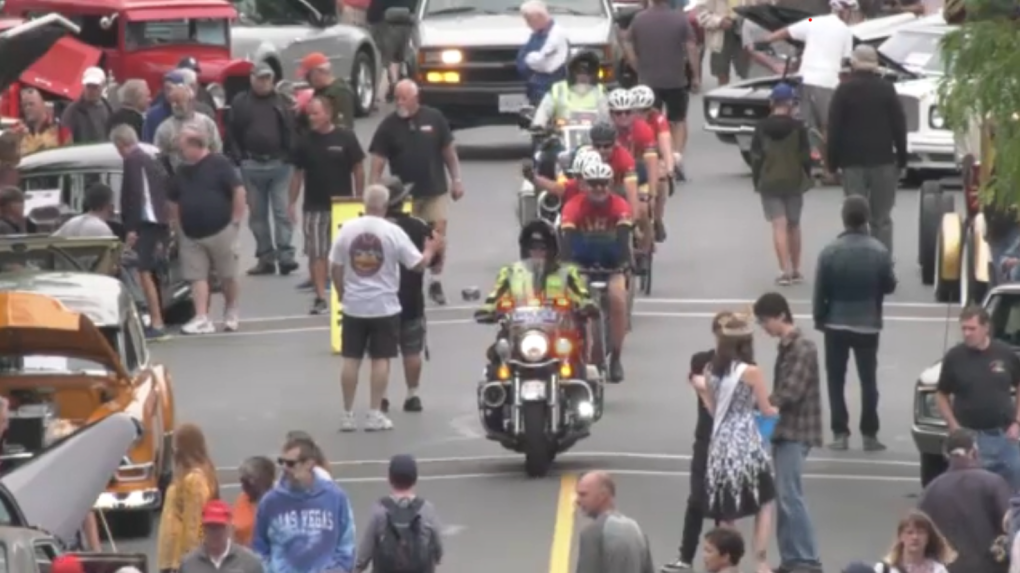 First responders geared up and pedaled through the Ladysmith Show and Shine car show to raise awareness about the 2021 Tour de Rock. (CTV)
Vancouver -

For the second year in a row, the Canadian Cancer Society's Tour de Rock won't consist of the traditional 1,200-kilometre ride down the full length of Vancouver Island because of the COVID-19 pandemic.

On Saturday, however, things got a little closer to normal than they have been, when first responders geared up and pedaled through the Ladysmith Show and Shine car show to raise awareness about the 2021 tour.

"Tour, historically, is hundreds of events that lead up to tour, and obviously, we haven't had those this year, so it's nice to be at an event where it feels, quote-unquote, 'back to normal,'" McFadyen said.

This year's Tour de Rock will begin on Sept. 20 and feature cyclists riding in their own communities, rather than in a group ride across the island.

The first events will be held in Port Alice, Port Hardy and Port McNeill, where the tour traditionally begins.

Over the course of the following 12 days, events will be held in communities progressively farther south on the island, culminating with an event in Victoria on Oct. 1.

Organizers hope to raise $600,000 for pediatric cancer research and to support programs like Camp Goodtimes that serve children with cancer.

Ontario is extending the deadline for child-care operators to apply for the $10-a-day program and standardizing the process in an attempt to get more providers to sign up.