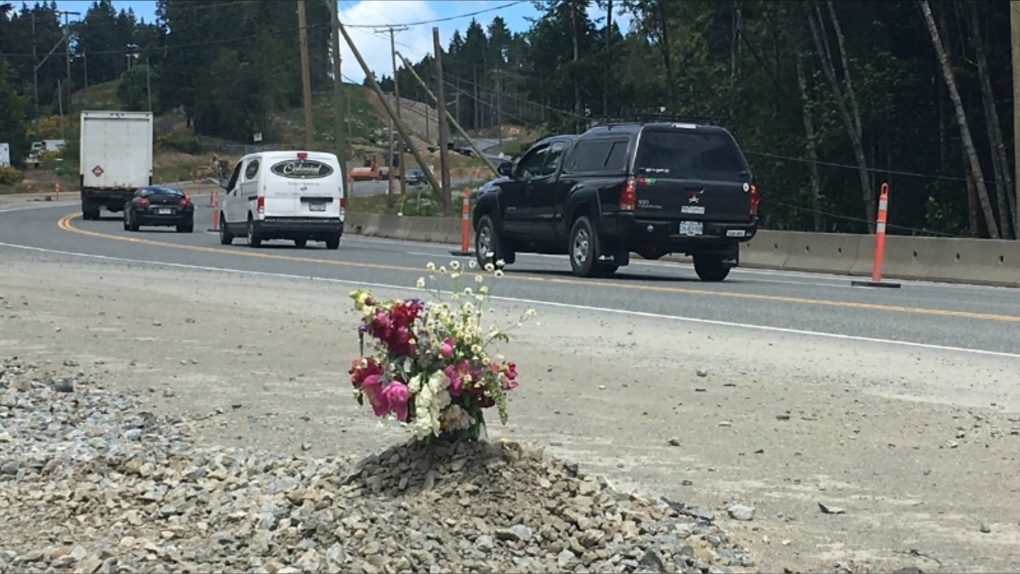 A memorial was created along the Malahat for David Tilley, a 46-year-old Vancouver man who was killed in a collision: June 11, 2018. (CTV Vancouver Island)

VICTORIA -- The BC Coroners Service has released its report on a fatal Malahat crash that resulted in the death of one man and sent two people to hospital on June 9, 2018.

The coroner’s report says that the driver of a minivan, who was allegedly impaired, was travelling northbound on the Malahat at approximately 101 km/h when she crossed the centre line and collided with an SUV that was travelling southbound.

The driver of the SUV, 46-year-old David Tilley of Vancouver, died shortly after the crash occurred. A passenger in the SUV was also sent to hospital for treatment of serious injuries.

Meanwhile, the driver of the minivan, 31-year-old Sara Thomas, was also taken to hospital for treatment.

Thomas was later charged with six offences related to the crash, including impaired driving.

The coroner’s report says that the crash occurred in a construction zone on the Malahat highway, located roughly 500 metres north of Aspen Road.

While Thomas travelling more than 100 km/h at the time, coroners say that there is “no physical evidence to indicate that the (minivan) was out of control and witness statements confirm this.”

The coroners report adds that evidence from the vehicle suggests that the driver of the minivan only reacted 0.5 seconds before the collision occurred, “when the accelerator pedal was released and there was a slight steering input to the right.”

“This all indicates that the Dodge Caravan’s entry into the southbound lane was as a result of non-cognitive driving actions such as medical distress, fatigue, distracted driving or impairment,” say coroners.

The coroner’s report adds that a mechanical inspection of both vehicles indicates that mechanical factors did not contribute to the crash.

Since the fatal crash occurred, the section of highway where the collision took place has since been expanded from three lanes to four, and three kilometres of concrete median have been installed. In fact, the installation of the medians was part of the construction that was taking place in the area when the crash occurred.

Coroners believe that the new medians will prevent any similar crashes from occurring in the future.

Thomas, was originally scheduled to appear in court on May 19 for six charges related to the crash, including impaired driving and dangerous driving.

Her court date has since been postponed to July 21 in Duncan.