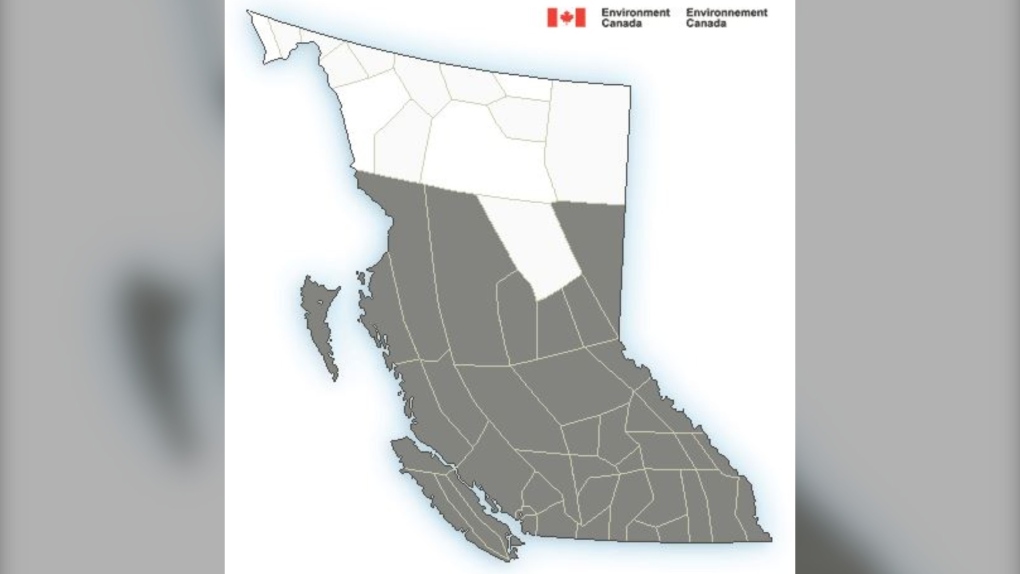 Regions in B.C. that are under special weather statements due to smoke are shown: Sept. 14, 2020 (Environment Canada)

VICTORIA -- Environment Canada continues to warn of poor air quality and reduced visibility across most of British Columbia Monday due to smoke coming from wildfires in Washington state, and from local fires.

The weather agency says that smoke could reach higher altitude areas, like Prince George, as well as lower latitudes due to falling temperatures, meaning that smoke could linger in every area of the province Monday.

Meanwhile, in Metro Vancouver, officials are warning residents to be especially conscious of air conditions due to U.S. wildfire smoke as well as a fire that broke out in New Westminster Sunday.

The New Westminster fire was sparked overnight along the city’s waterfront park and has since prompted the closure of three Lower Mainland schools Monday.

“We already had a smoke advisory before this happened with the wildfires and smoke coming from Washington state. This smoke is highly toxic, so you don’t want to be breathing it in,” he said.

As of Monday morning, the federal government's Air Quality Health Index, which rates air quality on a scale of one (low risk) to 10 (very high risk), rated almost all communities in Southern B.C. as having a 10-plus air quality rating by 8 a.m.

British Columbians are encouraged not to take part in any strenuous outdoor activity until the air quality advisories are lifted.

Environment Canada adds that anyone with underlying health conditions, children, older adults and pregnant women are at a higher risk of negative health effects due to the poor air quality.

“Smoke levels on Monday are expected to be lower (than the weekend),” said Environment Canada in a special weather statement. “However, localized smoke concentrations may vary widely across the region as winds and temperatures change, and as wildfire behaviour changes.”