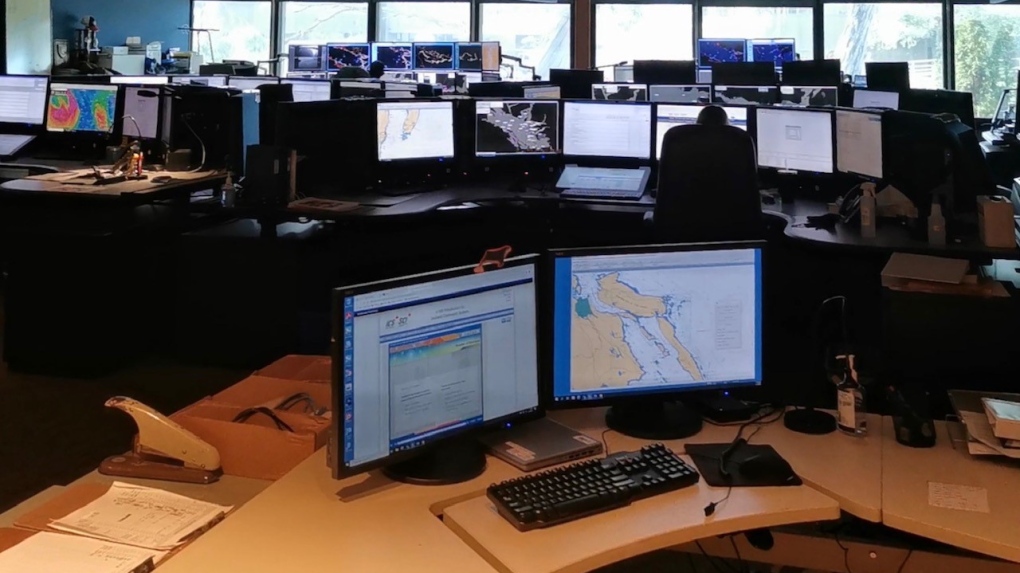 SIDNEY, B.C. -- It’s being described as a first of its kind. A new “Marine Mammal Desk” has been set up by the Canadian Coast Guard in Sidney, B.C. The new service is co-located within the coast guard’s Marine Communications and Traffic Services Centre.

The new service will help protect southern resident killer whales – as well as humpbacks, grey whales and other species - from vessel strikes, entanglements and other threats.

Whale sightings can be relayed in real time to advise vessel traffic of the animals’ exact location and activities.

“The goal, being able to do this, is eventually to start to reduce the interactions between commercial vessel traffic and marine mammals themselves,” says Scott Rear, regional program specialist with marine communication and traffic services for the Canadian Coast Guard.

“Say we get a Transport Canada aircraft doing a flyover and they give us a whale sighting; they give us a location, how many animals, type of species and direction of travel,” says Rear. “We take that information and we broadcast it over a secure network to several enforcement agencies like conservation protection, Transport Canada, Parks Canada and even the RCMP. That lets them know in real time where the animals are. If they have vessels on the water, they can go and monitor and make sure (the whales) are not being interfered with.”

Any violations will be reported to both Transport Canada and enforcement agencies, such as Fisheries and Oceans Canada’s Conservation and Protection Branch and Parks Canada, for disciplinary action.

Between its launch in October and the end off 2020, the Marine Mammal Desk had filed two interim order contravention reports that were shared with Transport Canada, which later resulted in a monetary penalty against a repeat offender.

The Government of Canada says the protection of southern resident killer whales and other cetaceans is a priority.

The Marine Mammal Desk will also act as a back-up to reporting systems, such as the Marine Mammal Incident Reporting Hotline operated by Fisheries and Oceans Canada at 1-800-465-4436. Mariners and the public can call the hotline to report injured, sick, distressed or deceased marine mammals.

If, for any reason, a vessel can not contact the hotline, they can contact the Marine Mammal Desk at 1-833-339-1020, which will ensure the required agencies are alerted to the incident.

The Marine Mammal Desk is also able to provide mariners with information on Transport Canada’s Interim Order for the Protection of Southern Resident Killer Whales.

“I think it's just a really exciting time for us,” says Rear. “It really helps feed into our mandate of protecting the marine environment. I think if more agencies and more people become aware of the Marine Mammal Desk and what it's doing, it's only going to increase its capabilities.”

More information on the Marine Mammal Desk is available on the federal government’s website.